James Hetfield is a musician, who surely needs no introduction. He is Metallica’s frontman, singer, songwriter and guitarist, and has played a very important part in the development of the Metal genre.

Metallica’s guitarists – Hetfield and his colleague Kirk Hammet – have long been collaborating with ESP Guitars. The LTD James Hetfield Snakebyte is the most recent fruit of this partnership.

In the early years of Metallica, James Hetfield used to play a Gibsonin Explorer, and looking at his new signature model, it’s easy to conclude that this guitar legend still holds a place in his heart for angular guitars.

LTD’s James Hetfield Snakebyte (current price in Finland: 1.098 €) is an ultra-modern Metal-machine, with a clear stylistic nod to the Explorer.

Both the guitar’s body and set neck have been crafted from mahogany, while dark-black ebony has been chosen for this model’s fingerboard.

The Snakebyte’s body is noticeably more compact when compared to its vintage forefather, making for a lighter and more comfortable playing experience.

There’s a long, flat chamfer on the body’s bass side, which proved hard to photograph, but which really makes a difference in terms of the Hetfield signature model’s ergonomics. 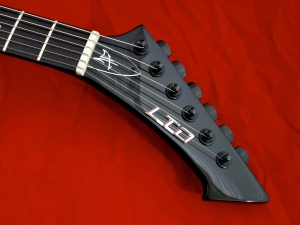 A set of locking Sperzel tuning machines have been chosen for their high quality and proven tuning stability.

The Tone Pros bridge and tailpiece combination is locked in place after adjustment, meaning everything will stay perfectly put even under the most demanding onstage conditions. 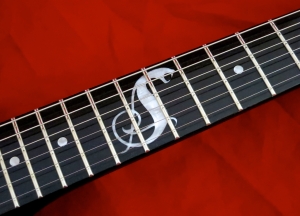 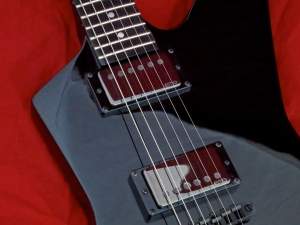 Active EMG-pickups have long played an important part in James Hetfield’s sound. A couple of years back EMG have introduced a signature pickup set –the EMG JH ”Het” Set – made to the legendary guitarist’s specifications, and used on this signature LTD.

The JH-Nneck humbucker has been developed based on EMG’s Model 60, but Hetfield’s humbucker uses separate ceramic magnets and fatter coils. EMG’s Model 81 has formed the basis for the JH-B signature bridge pickup, but here steel polepieces have been added to the pickup’s ceramic bar magnets.

According to EMG the ”Het” Set has a warm and organic basic tone, coupled with a very clear attack and loads of output power. 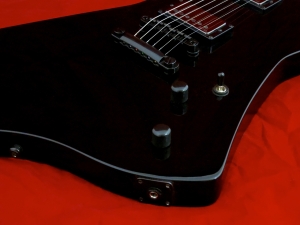 Hold your horses! Yes, the toggle switch works in the usual way, but the controls aren’t a master volume and a master tone, but rather two separate volumes – one knob for each pickup.

James Hetfield doesn’t need a tone control, as all his settings are dialled in by his guitar technician. This way he only has to concentrate on pickup selection, while playing and singing at the same time.

The battery compartment’s cover is held in place by machine screws and threaded inlets.

It’s true that in 1958 Gibson’s Explorer was a trailblazer thanks to its unusual, angular design. But it’s also true that this classic model is very large and cumbersome, often feeling like a bedside table strapped to your body.

Hetfield’s LTD signature model succeeds in keeping the Explorer’s angular spirit intact. Nonetheless, the LTD Snakebyte is a much more compact affair, which makes it far more comfortable to play and easier to hold.

The Hetfield Snakebyte is a fantastic player, as you would expect from a pro-quality guitar, such as this. The neck profile is a rounded ”C”. Our review sample came with a light action, measuring 1.8 mm (bottom E) and 1.6 mm (top e) at the 12th fret (with a set of 010s), and played well and rattle-free across the whole fretboard.

I must admit I was quite surprised at the sheer beauty of this guitar’s unplugged voice. There’s a strong, piano-like attack and an open character with a long sustain-phase.

EMG’s active ”Het” Set has the power of an approaching speedboat, yet the humbuckers still manage to offer open-sounding clean tones with plenty of organic mid-range character:

Switching to a High Gain channel takes the LTD Snakebyte straight into – surprise, surprise – legendary Hetfield-Metallica-territory. There’s power and attack to boot, and ample bite to cut through: 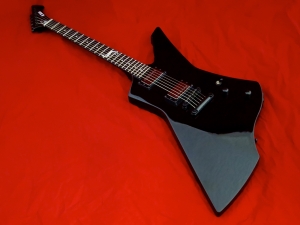 In my view, LTD’s James Hetfield Snakebyte is a top-notch precision tool for the Metal- and Thrash-guitarist. This probably isn’t the most versatile electric guitar ever, but if you’re into Hard ’n’ Heavy this guitar offers the most direct way to sheer sonic bliss.