It took quite some time for the electric bass to really catch on. Fender introduced the Precision Bass in 1951, but had to wait for almost a whole decade, before they felt that the market was ready for a second bass guitar from the company.

In 1960 Fender released its deluxe update – the Jazz Bass.

Leo Fender listened to the most common complaints made by players and sampled their suggestions for improvements, and he addressed these issues with the new model. The Jazz has a more slender neck profile, a more ergonomic body shape and it offers a wider sound palette (thanks to its two singlecoil pickups) compared to its forebear.

The very first batch of Jazz Basses was equipped with stacked concentric controls, which offered separate volume and tone controls for each of the two pickups (see the sunburst bass above).

But already in 1961 the electronics were updated to the less fussy combination now widely known as the Jazz Bass -set-up – separate volume controls with one master tone.

The pickups are reverse wound/reverse polarity, which means that when used together they defeat transformer hum and electromagnetic buzz effectively.

While the standard version was offered in three-tone sunburst only, the Jazz Bass was ordered in Custom Color -finishes quite regularly in the 1960s, often with matching headstock faces.

From the end of the ’60s and all through the ’70s the fretboard was bound and featured large block inlays. Maple fingerboards were quite common during the ’70s.

Despite the changes in its looks the Jazz Bass’ sound always stayed excellent. Its sound is slightly more slender and transparent than that of its equally famous stablemate. The front pickup is full, but less throaty than a P-Bass’ split-coil unit. The bridge pickup has a nice, nasal timbre, and the combination is slightly hollowed out with a fresh zing, which made funky slap bass styles so fashionable.

Check out the sound of my own Squier Jazz Bass (Made in Japan, 1985) here.

Leo Fender’s and George Fullerton’s Precision Bass was the world’s first electric bass guitar. It was introduced to the puzzled public in 1951.

Tony Bacon and Barry Moorehouse quote Fender’s old production chief from the 50s and 60s, Forrest White, on the initial impact the new-fangled instrument had (in their well-written ”The Bass Book”):

”Those who were not sure if Leo was crazy when he brought out the solidbody guitar were darn sure he was crazy now, since he came up with an electric bass. They were convinced a person had to be out of their mind to play that thing.”

Leo and George took the Telecaster-concept and adapted it for a bass instrument. At the same time they hit upon some standards – almost by mistake – that are still valid these days. The most important ones are the body’s additional long upper horn, which helped in balancing such a long-necked instrument, as well as the scale length of 34 inches (84,6 cm).

Initial problems in the project were the total lack of appropriate strings, which had to be custom-ordered from V.C. Squier, as well as tuning machines. At first they used sawed off double bass tuners, before they were able to order Kluson-machines, manufactured to Fender’s own specifications.

The first edition of the Precision Bass, made between 1951 and 1954, had a yellowish, semi-opaque-finished (blonde) slab ash body, a black Bakelite scratchplate, a Telecaster-style single coil pickup and a one-piece maple neck with a Telecaster-headstock. The simple bridge had only two saddles, which were first made from plastic and later from metal.

When the Stratocaster was introduced in 1954 the P-Bass received a slight make-over: the body gained Fender’s comfort contours, the scratchplate changed to single-ply white plastic and the standard finish became two-tone sunburst.

But Leo Fender still wasn’t quite satisfied with his creation: the pickup was picking up too much buzz, and its spiky signal tended to trash a lot of Bassman-amp speakers. Adding to this the Precision’s intonation wasn’t really very precise, because of the spartan bridge. And lastly it seemed that the small headstock had something to do with some dead notes on the g-string around the 5th fret.

All these problems were addressed in the major overhaul (in 1957), which turned the Precision into the classic we all know today: with a large Strat-style headstock, a bridge with four individual saddles and a brand-new split-coil pickup.

This new pickup consisted of two halves, one each for the E- and A-string as well as the D- and g-string, wound reverse and with opposing magnetic polarities. Once hooked up in series the split-coil pickup produces a humbucking signal with a singlecoil sound. Placing each string between its own pair of magnets (in contrast to the single magnet below each string in the old design) also smoothed out the attack phase of each note, which in turn resulted in a signal that was much easier on a bass amp’s speakers.

In 1959 Fender switched to rosewood fingerboards on all of their string instruments. Since the end of the 60s the P-Bass has been available both with a one-piece maple neck as well as with a rosewood fretboard.

Nowadays Squier and Fender offer a Precision-model for all seasons and budgets, from vintage replicas to modern updates.

You can listen to the sound of a 1976 fretless Fender Precision here.

The song was written by my late friend Pauli Rissanen, who also sings on the recording. 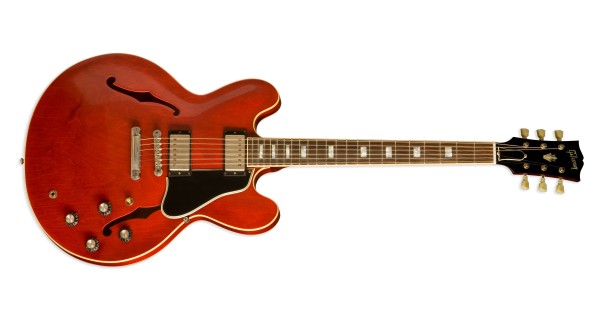 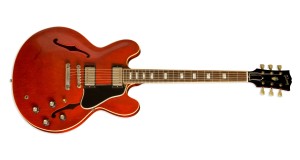 Ted McCarty, Gibson’s president from 1948 to 1966, has always stated that, looking back, he thought the ES-335 was his finest achievement.

The ES-335 has a thinline body made from steam-pressed maple plywood. Although the guitar does remind you of a classic Gibson hollow-body Jazz-box, this model is actually halfway solidbody in terms of its build.

This is because a semiacoustic electric guitar has a solid wood centre block running the length of the body from the neck joint all the way down to the back strap button. The centre block gives a semi a longer sustain, while keeping howling feedback at bay.

The block also allows the use of Gibson’s typical solidbody hardware – namely the Tune-o-matic-bridge and the stop bar – which add some clarity to the mix.

For their part, the ES-335’s hollow wings bring a bit of air to the mid-range, making the guitar sound more open and airy than a Les Paul for example.

Due to its relatively large body, a semi isn’t probably the best model for a small beginner (of less than 160 cm height), but as long as size isn’t an issue this lightweight and well-balanced ergonomic style of guitar is a fine choice.

Gibson’s subsidiary Epiphone has produced many of its own variants in the 335-style since the 1960s – from the glitzy Sheraton (the natural-coloured guitar in this post) to the minihumbucker-equipped Riviera, with its own, slightly brighter tone. 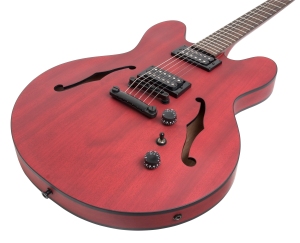 The relatively new Epiphone Dot Studio gives you superb bang-for-the-buck, with its pared down, no-nonsense looks. Here the body is made from mahogany plywood, with the controls streamlined to one master volume and one master tone.

I’m an avid fan of the semi-style body.

Here’s a snapshot of my Epiphone Casino and a late-70s/early-80s ES-335-copy made in Japan by Kasuga: 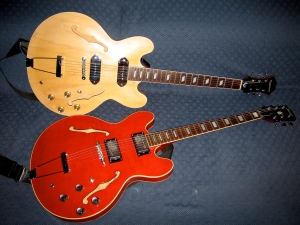 Listen to both guitars here