Through some rather clever bargaining on his part, one of my sons recently got his hands on this – a Tokai LC-85.

We have a one-piece mahogany neck, which in this limited edition version is oil-finished, instead of lacquered in black.

The ebony fingerboard carries jumbo frets, as well as pearloid fret markers. Master luthier Juha Lottonen has given this guitar a fret polishing, as well as a new bone nut.

The body is made from a mahogany back and a carved maple top. Black and white binding gives the guitar a deluxe look. 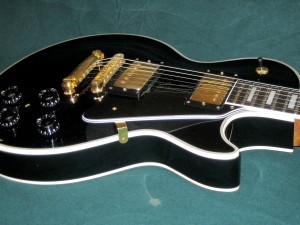 As this guitar was acquired used the gold-coloured plating on the hardware shows some cool signs of wear. The bridge is a Gotoh tune-o-matic. The pickups are Tokai’s own PAF-Vintage Mark II -models.

And here’s a look at the sealed Gotoh-tuners…

This guitar plays like a dream – the feel is really effortless and fluid.

Tonally the Tokai PAF-style pickups sound great and lively, and they have a vintage style, medium output. It’s a fantastic humbucker tone with a little added sprinkle of bite, brought to the mix by the maple top and the ebony fretboard.

The only thing probably worth upgrading sometime, may be the slightly stiff, boxed three-way toggle selector.

Stay tuned for some soundbites in the near future…