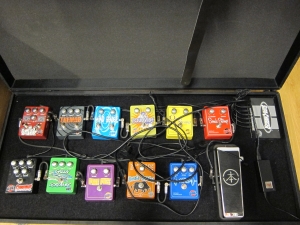 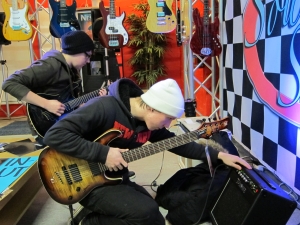 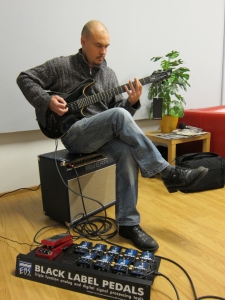 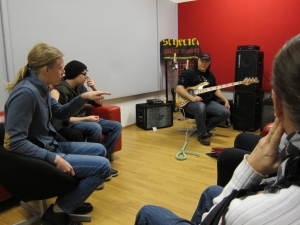 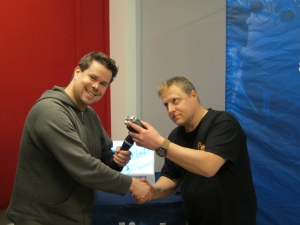 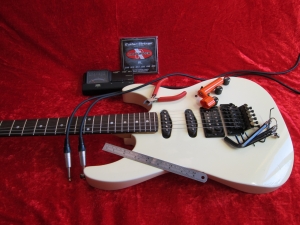 Here’s what you need:

A pack of strings, a wire cutter, a tuner and a guitar lead. A cheap plastic crank speeds up the whole process of string winding.

Most important of all are allen/hex keys in the correct sizes. Note that US-made Floyds tend to use imperial (inch-sized) keys, while most licensed vibratos (for example Schaller and Gotoh) use metric (millimetre) keys. Never, I repeat, never use the wrong type of hex key, as it will ruin the bolts in no time!

A metal ruler comes in handy for measuring the action at the 12th fret before you start. If you take down these measurements it will be easy to readjust your guitar’s action, should the need arise, due to the new string set differing in gauge compared to the old set.

Because a double-locking vibrato is such a finely balanced affair, I’d recommend changing strings one at a time – starting with the low E-string and working my way up to the high e.

Taking all strings off at once will push bridge’s locking screws into the face of the guitar, leaving nasty marks. Furthermore removing the string-pull completely may cause the bridge plate’s knife-edges to jump out of their grooves in the height-adjusting posts, and getting the bridge back in place without damage is a nightmare.

If you need to remove all strings – for example to clean and oil the fingerboard – keep the vibrato in place by placing a suitably sized cushion/protector (cork, wood, stiff foam) between the locking screws and the body face before you slacken the strings. Don’t push the cushion in too deep or you might bend the steel leaf springs, which counterbalance the fine-tuners (look at the fine-tuner picture further down).

We start here, at the locked top nut. 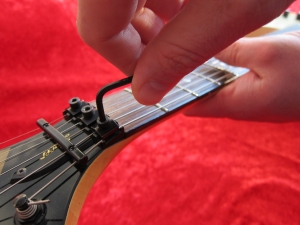 Remove the lock and bolt and put both away safely.

A well-installed Floyd Rose nut should look like this: The strings rest firmly against the whole surface of the metal top nut.

On some cheaper guitars the part of the string that’s facing the tuners may be lifting off slightly. Per se this is not a real problem, you only have to factor in that the string’s pitch will rise noticeably when you tighten the lock. 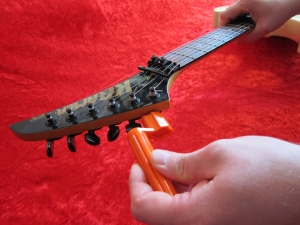 This is what the bridge looks like. The strings are locked in their respective bridge saddles with the long bolts protruding at the back of the bridge.

Different versions can have the fine-tuners – the knurled, upward-facing screws – in a slightly different position, but the principle is the same cross the board.

Open the string lock using the correct hex key. All you need is a gap wide enough for the old string to come out and the fresh string to go in.

Putting a new string on starts at the bridge on Floyd Rose -equipped guitars.

Snip the ball-end off (mind your eyes), then insert the string as deep as it will go into the bridge saddle and lock it in place (in the reverse process of the removal). 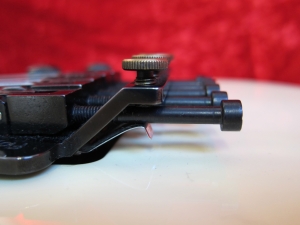 Make sure to set the fine-tuner to about halfway. This will give you enough leeway for tuning. 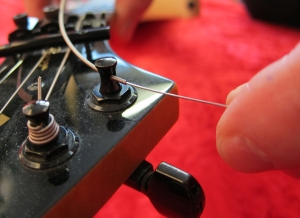 …and lock the string in by pulling it up away from the body.

Keep the string pressed downwards, while you’re turning the crank. Each new winding should pass under the one before it.

I’d recommend cutting off the surplus string in close proximity to the tuning post. Then I bend the stub down towards the headstock face. Be careful, a cut off string is very sharp!

Before you lock the top nut it is vital to thoroughly stretch the string. It works like this: First you tune to pitch using the tuner on the headstock, then you stretch each string, and retune again. Once you’ve repeated this process six to eight times, you should be ready to go.

Your fretting hand should hold down the string you’re stretching at the first or second fret to keep the string from jumping out of the top nut.

When the tuning is settled and the vibrato is in the right position – meaning its baseplate is parallel to the body – you can lock the top nut.

If the vibrato’s equilibrium has been upset by changing the string gauges you will have to readjust the vibrato springs (in the back compartment) by moving the spring claw with a Phillips-head screwdriver.

Move the spring claw in small increments, then retune the guitar and check if the vibrato is now parallel with the body’s top. Repeat this if necessary.

The last stage should be checking and resetting the guitar’s intonation. Always check your intonation with the guitar in playing position, by comparing the correctly tuned open string (or its 12th fret harmonic) to the fretted pitch at the 12th fret.

Sadly, intonation adjustment on Floyds is a pain in the proverbial: You have to completely loosen the string, open the small hex bolt that locks the saddle’s intonation (directly underneath the string), and then push the saddle manually to the desired new position. Then you lock the saddle in its new position using the correct hex key, retune and check again for correct intonation.

If the fretted note is flat (its pitch too low), you need to adjust the bridge saddle closer to the bridge pickup.

If the fretted note is sharp (its pitch too high), you need to adjust the bridge saddle further away from the bridge pickup.

Note that the bridge plate has three tapped holes for each intonation bolt. If you run out of space you have to completely remove the bolt and move it to a hole that will work with the saddle’s new position.

Thanks to Tommi Posa for the loan of his vintage 80s Kramer Pacer Custom II!