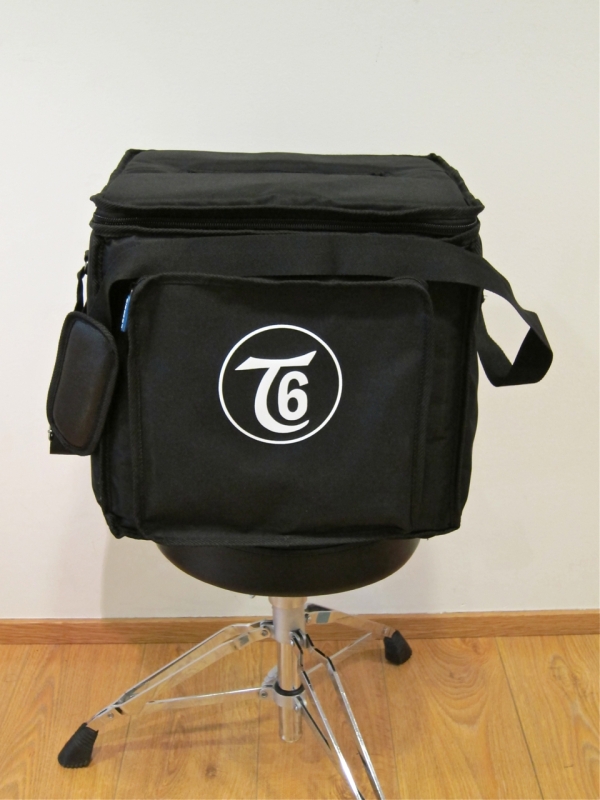 A dedicated amplifier for acoustic guitar opens up plenty of interesting possibilities: most small pub gigs won’t require a PA-system anymore, because the majority of acoustic combos are equipped with a second input channel for a microphone. For larger gigs you can assign the acoustic combo to monitoring duties, putting yourself in full control over your stage sound, and then feeding your signal on to the FOH mixer. 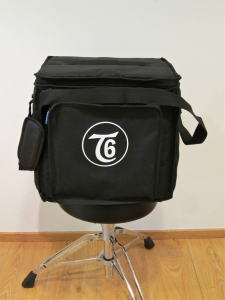 The Tanglewood T6 (current price in Finland: 396 €) is a very compact, two-channel combo, pumping out 60 Watts of power through an 8-inch speaker. The T6 weighs a mere 11 kilos, and is very easy to transport thanks to the nice gigbag that comes with the amp.

The Tanglewood feels rugged enough for regular gigging, with its cabinet covered in textured nylon. A fat foam grille protects the speaker.

The T6’s first channel is meant for use with an acoustic guitar (or similar instrument), offering controls for gain and the 3-band EQ. The High/Low-selector lets you tame hot guitar preamps, while Contour adds brilliance to a dull signal.

Channel number two is the right place to connect a microphone or a line level signal source. It sports an XLR/jack-combo connector, a Mic/Line-selector, as well as controls for gain and 2-band EQ.

Tanglewood’s effects section lets you choose between four different effects – two different reverbs (Hall and Plate), one combination effect (Chorus/Room) and one delay. The Effect Pan -knob lets you assign the signals from both channels to the effect section’s input. Going all the way counterclockwise will feed only the signal off channel one to the effect, while going all the way clockwise only sends channel two’s signal to the effect processor. The Level control adjusts the amount of wet signal in the output mix.

The back panel holds all the connectors necessary for the T6 to communicate with an auxiliary signal, an mp3-player, your tuner, a mixer or soundcard (XLR or line out), a pair of headphones, as well as a footswitch (for muting the effects on the fly).

If need be you can even hoist the Tanglewood T6 up onto a speaker stand.

I must admit that the quality of the T6’s basic sound came as a surprise to me. Even without resorting to the EQ controls this combo rings out clear and true, with a fresh and punchy tone that’s never brittle or abrasive (all soundbites have been recorded using a Taylor 110CE -guitar):

The Tanglewood’s Hall-reverb sounds lush and dense, with just the right amount of presence:

Switching to Plate-reverb I found a good amount freshness and a nice, unobtrusive charcter:

For my taste I would have preferred for the Chorus/Room-combination to contain a larger amount of chorus with added depth – still, the effect is more than useable in its present form, too:

The Delay-effect feels a little half-hearted; not because of its sound, but because the delay time is factory-set to a medium value, which will only fit some songs. A better solution would have been to have offered either a selector – slapback/medium – giving you two different time presets, or a full-blown tap tempo function, which would allow you to set song-specific delay times.

If you’re on the lookout for an easy-to-use, good-sounding acoustic combo that won’t cost you an arm and a leg, I suggest you rush out to your Tanglewood dealer. With the T6 you only have to set your gain levels and the master volume, adjust the effect section to your liking, and you’re ready to roll. The amount of amplification is ample for most small pub gigs, and the T6 works well as a backline stage monitor, as long as you don’t play in a raucous Hard Rock band.

The Tanglewood’s only real drawback is the complete absence of dedicated feedback-prevention tools, like a notch-filter or an automatic feedback defeater. Nevertheless, you can well work your way around this by positioning the T6 sensibly, and maybe closing you guitar’s soundhole, should you require high sound levels.