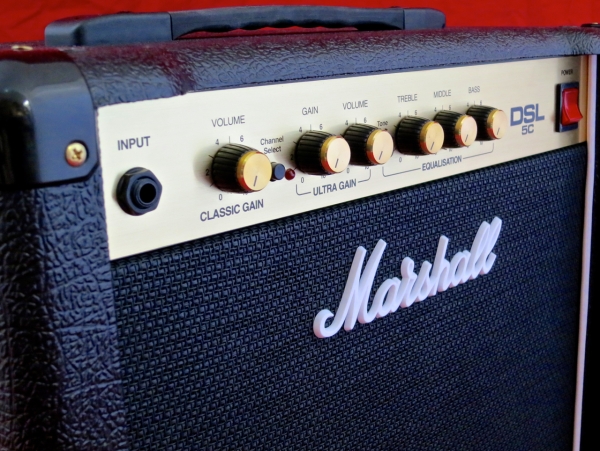 Marshall’s DSL5C combo is the newest – and smallest – member of the DSL-series.

The DSL-range has its roots in the year 1997, when Marshall introduced their – now legendary – JCM2000 Dual Super Lead -head. The JCM2000 was the first Marshall amp that combined a vintage-voiced Plexi-channel and a modern Ultra Gain -channel in one chassis.

The production run of the original DSL-series was discontinued in 2007, with the JVM-range superseding it. The new DSL-series offers the company’s most-affordable all-valve amps to date, which are produced at Marshall’s own facility in Vietnam.

As you can easily guess by its name, the Marshall DSL5C (current street price in Finland around 520 €) is a five-Watt, two-channel combo.

In terms of its looks and the quality of its finish, this is a genuine Marshall. Quality control at the Vietnamese factory seems to as stringent as in Britain, and the combo looks great and feels well-made and sturdy. 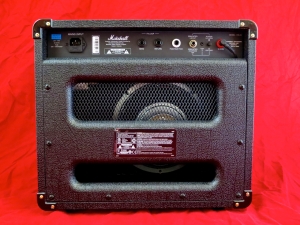 The DSL5C comes with an open back cabinet. The upper opening in the cabinet’s back is covered with a metal grille to keep stray fingers and hot tubes apart form each other.

The DSL5C’s speaker is a ten-inch Celestion Ten 30, which is meant to provide a big, warm bottom-end, coupled with a healthy dose of ”Celestion grunt” and bite. 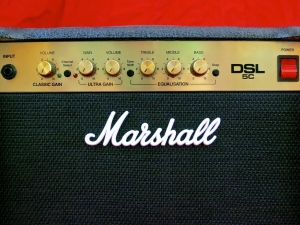 The Marshall DSL5C is a two-channel, all-valve combo:

Channel one – Classic Gain – is voiced to give you a classic Marshall 1959 -style tone and gain structure. The Classic-channel goes from bright and clean all the way to mid-level, classic crunch. Due to the fact that this channel doesn’t have a master volume, distorted sounds can only be had at very high volume levels – unless you switch to Low Power mode (more on this further down).

True to its name, the second channel – Ultra Gain – is made for modern, saturated high-gain sounds.

Both channels share a three-band EQ-section, which means a certain amount of tonal compromises will have to be made. But thanks to the way both channels have been voiced, a shared EQ doesn’t pose any real problems in the Marshall DSL5C’s case.

Pushing in the Tone Shift switch will give you a thinned out, sharper mid-range, making it ideal for many Thrash Metal tones. Engaging Deep bolsters the bottom-end at the output stage for a fatter sound. 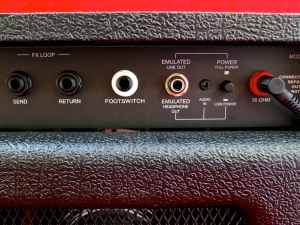 The back panel offers you an effects loop, as well as a footswitch jack for the DSL5C’s sturdy channel switch (supplied, see pic below).

There’s a very nifty speaker-emulated output designed into this Marshall combo, which works in two different ways, depending on the setting of the Power-switch:

In Full Power mode the output gives out a line level signal, which can be sent to a mixing console or your recording equipment. The speaker will run even with a plug connected to the output. In Low Power mode (the manual says 0.5 Watts, the website 1 W) the output level is changed to work with headphones, and plugging a pair of cans in will mute the speaker. The Aux In only works in Low-mode, and its signal will be sent directly to the headphones. 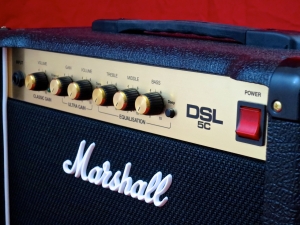 In my opinion Marshall’s DSL5C is a fantastic-sounding little Rock- and Metal-combo, ideally suited for use in your bedroom, for practice, for recording and for backstage warm-up.

My only small niggle would be with the emulated output of our review sample, which produced more hiss than what I’d have expected. Anyhow, I was able to EQ out most of the hiss for the sound clips, meaning it really isn’t that much of a problem. And then there’s always the possibility that there was something wrong with this particular combo…

The DSL5C’s two channels enable you to get a wide variety of different Rock-, Metal- and Thrash-sounds out of this little combo, depending on your gain-, volume- and EQ-settings, but also on the power mode chosen. Going to Low Power doesn’t only drop your output levels, but also adds a lot of tasty, squashy power amp compression. This means that you can choose between very tight sounds (Full Power) and fatter, compressed tones (Low Power) by using the switch on the back panel.

All sound clips have been recorded in Full Power mode to allow for direct comparison between the miked up sound of the speaker and the speaker-emulated output.

For starters I played my Stratocaster through a clean setting on the Classic-channel (recorded with a Shure SM57):

…and here’s what the same bit sounds like recorded directly via the emulated output:

Here’s the Classic-channel and the neck pickup of my double-humbucker Hamer Studio Custom (miked up):

…and the same clip recorded direct:

Here’s my Strat into the Ultra-channel (Tone Shift off), recorded with the SM57:

This is the Hamer, tuned to Drop-D into the Ultra-channel (Tone Shift on), miked up:

…and this is the direct recorded version:

Marshall’s cute and cuddly new five-watter, the DSL5C, is a great choice as a first tube combo (”My first Marshall”), as well as a precision tool for any guitarist in those situations, when high wattage is more of a problem than an advantage (like at home or in the project studio).

We’d like to thank DLX Music Helsinki for the loan of the review amp!