Until now most of Blackstar’s designs were based on the typically British tones of EL34 and EL84 power tubes, often associated with Marshall designs.

The new Artist combos feature power amps built around 6L6 valves, as used in many of Fender’s classic designs. According to Blackstar the new Artist amps are designed to combine the best bits of the typically British Class A tone (with two ECC83s in the preamp section) with the dynamic range and chiming top end of a 6L6 power section.

Kitarablogi.com was given the opportunity to take the smaller Artist model – the Blackstar Artist 15 (current price in Finland: 799 €) for a spin.

For a combo that comes equipped with a single 12-inch speaker the amp’s cabinet is rather large. The reason for the cabinet’s size becomes clear when you look at the Artist 15 from behind. 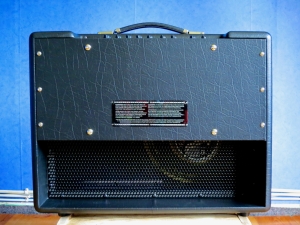 The combo’s Celestion V-Type G12-speaker has been placed deliberately to one side of the combo. Blackstar doesn’t tell us exactly why this configuration has been chosen, but I’d wager that the idea behind this is to harness the benefits of a large, stiff front baffle and a larger cabinet – namely: a crisp attack, and a warm, full bottom end.

Celestion’s V-Type comes loaded with a ceramic magnet. According to Celestion this speaker combines a classic tonality with a modern power rating. 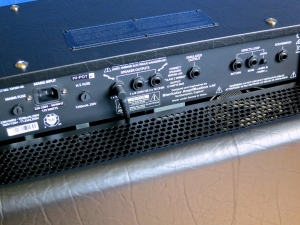 The Blackstar’s back panel sports a whole array of connectors for things such as external speaker cabinets, a speaker-emulated line out, an effects loop, as well as the channel footswitch that comes with the amp.

Blackstar’s Artist 15 is rated at 15 watts of output and features two preamp channels:

Channel 1 is the so-called boutique channel, designed to put the least possible amount of components between your guitar and the speaker. This channel sports only two controls – Volume and Tone – before the signal is sent on to the master section.

Channel 2 gives you the full Blackstar-experience – you’ll find separate Gain and Volume knobs, a three-band EQ section, as well as Blackstar’s proprietary ISF-control. Setting the ISF knob to zero will result in bright and sinewy Fender Blackface-style sounds, while ISF at full on will give you muscular, Marshall-type tones from this channel.

Channel 1 clearly has a much rounder and warmer basic tonality than the (more versatile) second channel. With clean settings Channel 1 will give you a fuller mid-range compared to the more Fender-like, chimey Channel 2.

…and here’s Channel 2 played with the same guitars:

The Artist 15’s channels also differ in the amount of gain they offer:

Channel 1 will take you from clean all the way to Rockbilly-style breakup and traditional Blues overdrive, while Channel 2 offers more than enough dirt for chunky Rock tones.

…and here are two clips of Channel 2 with Gain full up:

The rhythm guitar tracks on the demo song have been recorded with a 1970s Japanese ES-335 copy (made by Kasuga; left channel) and a maple-necked Fender Stratocaster (right channel). The lead is played on the Kasuga: 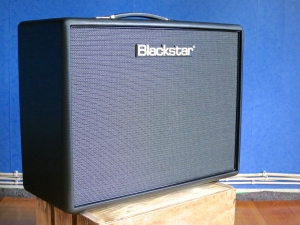 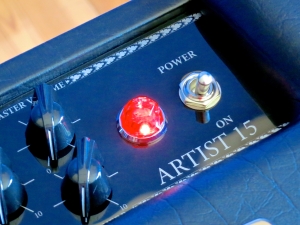 The new Blackstar Artist 15 isn’t your typical two-channel combo, which offers you a clean channel and a dirty channel. This is a valve amp that’s all about choices and flexibility.

Blackstar have noticed that pedalboards are becoming en vogue again, which is why their new Artist combos offer enough headroom for clean tones in both of their two channels.

For pedal users the big advantage of the Artist 15’s architecture lies in the fact that the combo offers two high-quality clean variants in the same amp. Channel 1 is a back-to-basics boutique-/AC30-style channel, while Channel 2 offers a much broader range of clean tones, all the way from Fender to modern Marshall.

Of course, you’re free to use the Blackstar Artist 15 in the traditional channel-switching fashion, too, which will give you a top-notch clean sound from Channel 1, and a very versatile array of quality overdriven and distorted tones from Channel 2.

Either way – the Blackstar Artist 15 hits bull’s-eye, in my opinion, and I can only recommend checking one out for yourselves.