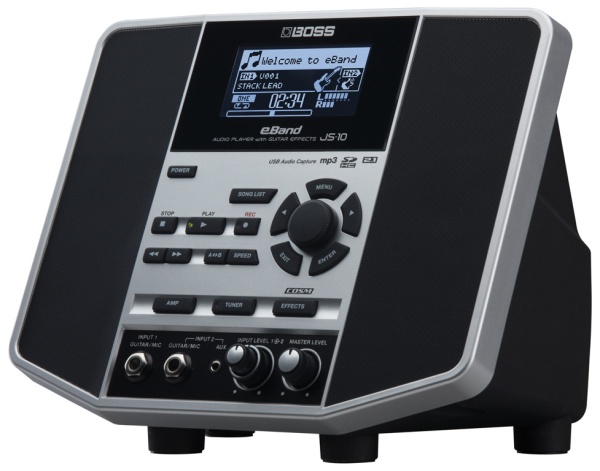 The new Boss JS-10 eBand (current RRP in Finland: 422 €) is the perfect companion for all of a guitarist’s entertainment, practicing and teaching needs.

The Boss JS-10 combines a wave-/mp3-player with a high-quality multi-effects unit – chock full with amp models and effects taken from the GT-100 – two guitar inputs, special features for practicing, as well as a full-toned 2.1 loudspeaker system.

The front panel is the eBand’s command central with a very clear and concise layout.

The playback and recording functions are catered for by the usual transport buttons we all know so well. Backing tracks (the eBand calls them songs), effects and menus can be accessed via their own buttons, and then changed using the navigation buttons and the large data wheel.

The lowest row of buttons gives you quick access to the current amp model and effect chain, as well as the digital tuner.

The lowermost, black section is home to the two instrument (or microphone) inputs. You can even plug in an outboard stereo signal source into channel two’s mini-jack if your keyboarder turns up for a little jam. 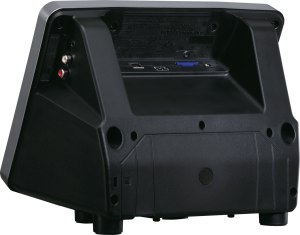 You can find all other connectors on the unit’s back:

There are two usb-port – one for connection to your computer, one for a usb-stick. You can connect a footswitch or an expression pedal to the JS-10, to switch effects on-the-fly, start or stop songs, or for wah-wah or volume pedal duties.

There is also a slot for a SD/SDHC-card. The SD-card included in the package also includes the eBand Song List Editor software, which enables you to sort and swap eBand-songs using your computer, as well as for ripping CD-tracks directly into eBand-mode (PC and MAC supported). The necessary drivers for using the JS-10 as an external sound card are also included on the SD-card.

Two analogue outputs are provided in the form of a pair of RCA-connectors and one mini-jack. 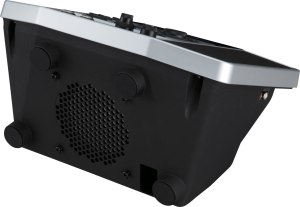 Thanks to its large woofer – installed into the unit’s base, firing down – the Boss JS-10’s sound is considerably fatter and punchier than what you’d expect from such a compact piece of gear.

The Boss comes preloaded with a large number of eBand-songs.

eBand-songs are basically very long audio loops, sorted according to their musical genre and BPM. The library includes drums only -songs, as well as eBand-songs with full arrangements for you to solo over.

The preloaded eBand-songs are all of a very high quality and musicianship. The tracks groove thanks to the fact that they’ve been recorded using real musicians, and not just programmed midi-patterns!

Still, you are free to use whatever you choose as your backing track in the JS-10 – regardless of whether the tracks are imported using the Song List Editor or whether you’re playing them directly off a usb-stick as wave- (44,1 kHz/16 Bit) or mp3-files (64-320 kbps).

To access Boss’ Phrase Trainer -section you have to push the Speed-button:

As their names give away, Speed is used for slowing down and speeding up the playback of the current song, while Pitch is responsible for changing the pitch.

Center Cancel will be familiar to most from many Karaoke DVD-players, using phase cancellation to mute parts of the stereo image. The effect can be assigned to work only on the stereo picture’s middle… 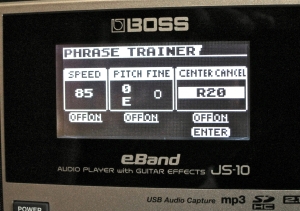 …but one of the JS-10’s specialities is its ability to cancel out signals from elsewhere in the panorama as well (say, for example, the lead guitar in a 1960s, ping-pong-stereo recording).

How well the Phrase Trainer -section’s features work is tied directly to the technical quality and resolution of the chosen eBand-song. This means that a wave-file or a higher quality mp3 (256 or 320 kbps) will sound more natural even with larger changes, than a lower resolution mp3. 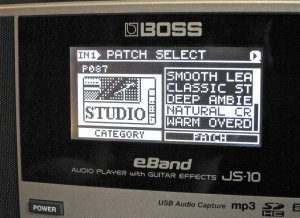 The eBand contains a long list of factory effect patches, which can be sorted according to genre. There are even a few patches for vocals and bass.

Additionally, you can also programme your own effect patches and store them in the effect section’s user library.

Each guitar input is assigned their own effect patch.

The eBand-songs already factory-loaded into the JS-10 are all tied to predetermined effect patches.

For quick editing Boss’ EZ Edit -function is most convenient. No need to fiddle with many different parameters – you simply move the cursor in the desired direction on the Solo/Backing- and Soft/Hard-axes and change the amount of ambience in the sound, and you’re set. 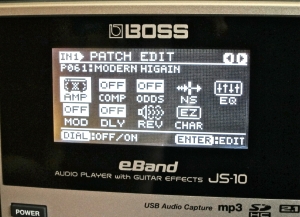 The Patch Edit -menu, on the other hand, gives you detailed access to all effect parameters in the signal chain.

There aren’t really many direct competitors to the Boss JS-10, which is kind of strange: Using the eBandin really is a faster and smoother ride than having to deal with a bunch of different devices, as well as their power supply units and connecting leads.

The Boss JS-10 is a great piece of gear, both for getting your own chops up, as well as for guitar teaching. It is straightforward in use, the effects sound great, the Phrase Trainer allows you to get to grips with devilish details, and you can check on your progress by recording your playing.

Here are three short pieces I recorded to demonstrate the quality of the eBand-songs and effects on offer: 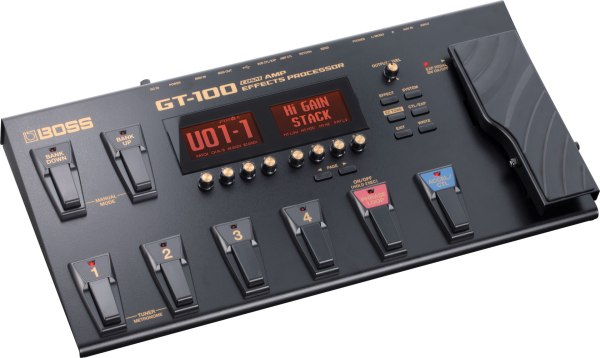 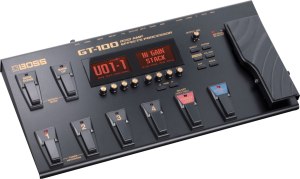