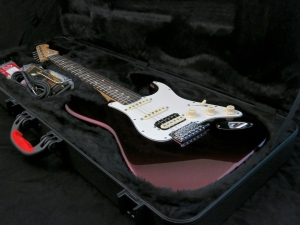 ”What – yet another Stratocaster model!? Who needs another Strat? Yeah, man, I’ve noticed there’s a ’bucker at the bridge position, but that’s been done before, hasn’t it!”

True, but this is a new American Standard model you should definitely try out, because the guys at Fender R&D have come up with a couple of nifty improvements that haven’t been available on HSS-Strats thus far. 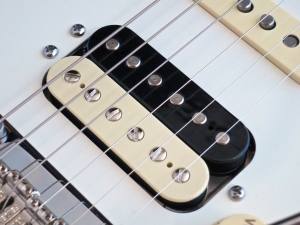 Fender calls its newest bridge humbucker the Shawbucker in honour of the man who designed it, Tim Shaw. Mr Shaw is a genuine living legend, and held in high esteem amongst people in the know. In the 1970s and 80s he worked for Gibson, and helped to turn around the company’s flagging fortunes and decline in quality. As the resident electronic guru he played a pivotal role during the design of models, such as the Gibson Les Paul Heritage 80, coming up with the first reissue of the original PAF-humbucker. This pickup is still in production, now known as the ’57 Classic. Later, Shaw moved on to Guild, and from there to Fender Musical Instruments.

Most of the improvements in the Fender American Standard Stratocaster HSS Shawbucker (current price in Finland approx. 1,600 €) centre around the electronic side of things.

In terms of its basic build the model continues within the time-tested parameters of the American Standard product line.

The Shawbucker Strat is built using a solid ash body and a bolt-on maple neck.

The neck profile is a friendly, modern ”C”, with the rosewood fingerboards flatter-than-vintage radius of 9.5″ and the 22 jumbo-sized frets further contributing to a contemporary playing feel.

The two-way truss rod is adjusted from the headstock. 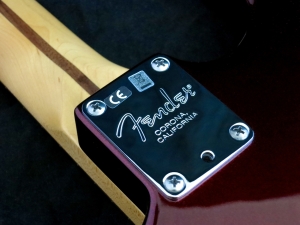 Our review sample came with a slightly steep bridge tip up, which I adjusted back to factory specs in no time, using the correct Phillips head screwdrivers.

The HSS Shawbucker features a well-balanced set of pickups:

A pair of Custom Shop Fat ’50s single coils have been selected for neck and middle pickup duties. The middle pickup is RW/RP, making position four on the five-way switch humbucking.

The control set-up looks pretty standard, but there’s more to the Shawbucker Strat than meets the eye:

Most HSS- and HSH-loaded guitars suffer from the compromises shared control pots and tone circuits entail, when mixing the different pickup types. As a result, you either end up with muddy-sounding humbuckers or uncomfortably scratchy single coils.

The genius of the Shawbucker Strat lies in the two stacked potentiometers it uses. The same pot shaft simultaneously turns both a 250k and a 500k pot stacked on top of each other. The Shawbucker Stratocaster employs these stacked pots for the master volume control and for the joint bridge-and-middle tone circuit. The 500k side deals with all things humbucker, while the 250k layer is reserved for the single coil signals. As the neck tone is reserved for the neck pickup only, it uses a traditional 250k pot.

The second position on the five-way switch gives you the middle pickup together with the split Shawbucker. 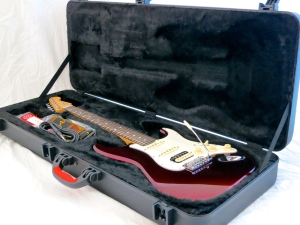 The American Standard Stratocaster HSS Shawbucker guitar comes in its quality hard case, with a strap and a guitar lead also included in the price.

The review instruments is a fitting torchbearer for this industry standard – it’s a great-feeling, great-playing, lightweight guitar.

Its acoustic voice is fresh, dynamic and strong, and the Shawbucker Strat’s vibrato works very well in the middle ground between a vintage vibrato and a double-locking Floyd Rose whammy.

Thanks to the chunky nature of the Custom Shop Fat ’50s, this model’s bridge humbucker never manages to overpower the single coils. Yes, there is a slight jump in signal level, when you switch from the Fat ’50s to the Shawbucker, but here it feels very organic and musical.

To my ears the HSS Shawbucker sounds fantastic, offering a bridge position signal boost, while retaining plenty of that ”stratty” character. The improved control set-up works just like it should – there’s a healthy dose of top end airiness in the bridge humbucker, while the single coils sound chiming, but fat. Now, here’s an HSS-Strat that finally does away with any unnecessary compromises! 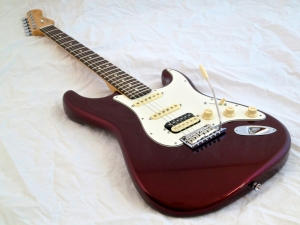 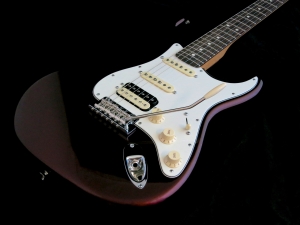 Despite the long-winded name, Fender’s American Standard Stratocaster HSS Shawbucker is an outstanding new variation on a proven theme. The Shawbucker-model takes the sound of HSS-guitars to a whole new level.

A big thank you to DLX Music Helsinki for supplying the review guitar! 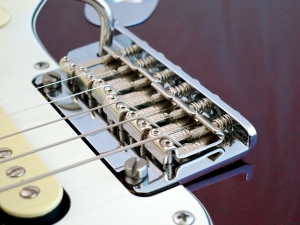