In MS-stereo two different microphone types are used to create two discrete signals, called Mid and Sides. The advantages of MS are that placement of the two mics in relation to each other isn’t as critical for overall phase coherence as in other techniques, and that you can adjust the amount of room in relation to the mid-signal during mixing.

Classic MS-stereo uses a cardioid microphone for picking up the mid-signal with a bidirectional mic turned 90 degrees (= shooting sideways) to record the side-sound. You will get a stereo sound picture from these two discrete signals by ”decoding” them: The mid-mic’s signal will be sent to the mixing console and panned dead centre. The sides-mic’s signal must be split to two channels, with one being panned hard left, and the other hard right with its polarity switched.

But, luckily, the Zoom Q2HD’s user won’t have to bother with the technical background, because you are only required to set the correct recording level and choose the stereo width you want from one of the five different options (mono to 150 deg) .

Naturally, the Q2HD can also record with Auto Gain (three settings: Concert, Solo and Meeting), and its high-pass filter will keep low end rumbling at bay.

The Q2HD is a typical Zoom video recorder in the sense that it is used with the unit in a vertical position. All inputs, outputs and controls have been placed on the recorder’s sides, while all transport and menu functions are controlled using the buttons below the crisp two-inch display. There’s even a tiny loudspeaker built in for a quick preview of the recorded material.

The video is processed and stored in H.264/Mpeg-4-format as MOV-files.

The Zoom Q2HD is extremely user-friendly: all of its menu-icons fit onto one screen, and the device’s parameters have been kept to a minimum. The unit’s well-made graphics enhance the user-experience nicely.

The Q2HD is powered by two AA-batteries (or rechargeables), giving you approximately two hours of video filming or four hours of audio recording.

You can watch recorded video in a slightly larger format using Zoom’s Landscape-feature (see picture above).

Zoom’s Q2HD also lets you perform the most basic of video editing inside the recorder itself , offering Divide- and Trim-operations.

Zoom also supply their basic Handy Share software on the mini-SD-card that comes with the recorder. The software works on both Windows- (XP 32-bit or better) and Mac-run computers (Mac OSX 10.4.6 or better). 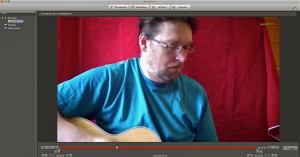 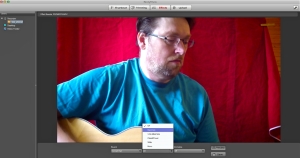 …as well as audio processing using reverb, compression and normalisation. The audio effects can be previewed before rendering them to the video-file.

Zoom’s Handy Share is quite OK for starters, even though many free video editing programmes, like Windows’ Movie Maker or Apple’s iMovie, will offer a lot more features and larger scope for adjustment. 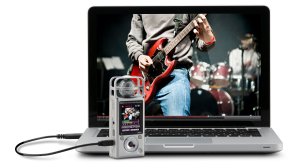 The Zoom Q2HD can also be used as a stereophonic usb-microphone, or as a webcam for chatting or live-streaming (for example via UStream). In streaming mode Zoom’s handy delay-parameter allows you to compensate for audio-video-offsets (bad synchronisation).

In my opinion the Zoom Q2HD is a nice little tool for making You Tube -videos.

Although the video quality of some digital still cameras is even better than that of the Zoom, the Q2HD’s far superior audio will swing many buying decisions.

The Zoom Q2HD’s clean and clear audio will enable you to make full-HD net videos you can listen to, as well as watch.

The following audio snippets were recorded to give you an idea of what the different stereo-width settings sound like. The distance between the Q2HD and the acoustic guitar stays the same from clip to clip:

* can be used to stream video