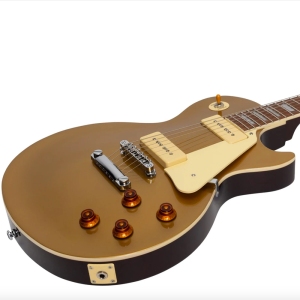 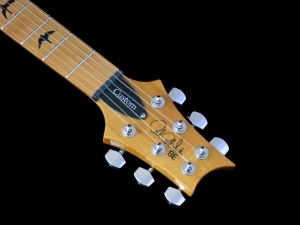 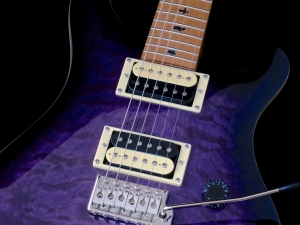 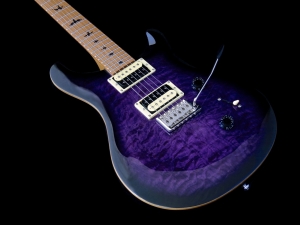 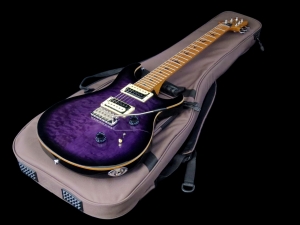 The Custom 24 is the foundation of PRS Guitars’ model range and the starting point of the company’s success story. Paul Reed Smith’s first handmade guitars were basically carved top, humbucker-equipped, deluxe versions of Gibson’s late-50s Doublecut Les Paul Special, not unlike Hamer Sunbursts. Mr Smith knew, when he started his guitar company, that he wanted to come up with a guitar that was truly his own brainchild.

This guitar was the PRS Custom 24, a model which fuses certain Fender elements (the double cutaway body and the vibrato bridge) with the glued neck, mahogany body and general aesthetics the Gibson Les Paul was known for. The 25-inch scale lies halfway between Gibson and Fender, while the improved vibrato, the straight string pull headstock and many cosmetic touches, such as the bird inlays, the deep treble cutaway chamfer, and the faux binding, were all Paul Reed Smith’s own designs.

PRS’ successful SE (= Student Edition) range is made in South Korea, which is where the special edition models come from, too. The Roasted Maple’s body stays faithful to the original by combining a contoured mahogany back with a carved maple top. To keep costs down the beautiful quilted maple front is a thin veneer on top of a plain maple top. The faux binding is achieved by masking the top’s rim prior to colour staining. The masking tape is then removed before the final clear coats are applied.

What makes this special edition special indeed is the neck:

Instead of mahogany topped with a rosewood fretboard, the Custom 24 Roasted Maple uses thermo-treated (aka torrefied or baked maple) as the material for both the set neck and the fingerboard. The theory behind the pressure cooker-type thermo treatment is that the heat and steam applied turns new wood into wood that closely resembles decades old, well-seasoned wood in terms of its look, and more importantly, its physical properties.

The fingerboard sports 24 gleaming, medium-sized frets, as well as black versions of PRS’ famous bird inlays. The smooth and well-cut nut is self-lubricating for optimum return to pitch.

The 85/15S pickups are connected to a three-way blade switch and a master volume and master tone. A push/pull-switch in the tone control splits both humbuckers into single-coil mode.

PRS’ patented vibrato bridge is much chunkier than vintage designs, and it also features a push in arm with adjustable tension.

The only small gripe I have with the review sample, is the guitar’s weight. Mind you, we’re not talking 1970s millstone Strats or Les Pauls here, but this particular guitar is heavier that I would have expected.

The workmanship, the quality of the finish, and the set-up puts PRS’ SE models in a league of their own, and the new Roasted Maple-version of the Custom 24 is no exception. The finish and fretwork are flawless, the action (with the supplied set of .009s) extremely slinky, yet completely buzz-free, and the floating vibrato works smoothly and without any tuning hiccups.

Even after all these years in the business I still find PRS Guitars’ neck profile names highly confusing. The company calls the carve on the Roasted Maple guitar a ”Wide Thin” neck. To me this always sounds like an early-Nineties super flat Superstrat neck, when in fact the SE Custom 24’s neck profile is slightly oval, well-rounded and of medium depth.

I don’t know it’s only my mind playing tricks, but to me it sounds like the maple neck adds a tiny bit of zing to this guitar’s acoustic tone. There’s a tiny amount of added ”Strattiness” in the mix, if you like.

Although I tend to be more in favour of low-to-medium output humbuckers, I have to admit that the PRS 85/15S units sound rather juicy, in spite of their high output. Thanks to the volume control’s treble bleed circuit you can really use the Custom 24’s controls to their fullest effect, without compromising your tone. The option to split the humbuckers for more wiry tones is an additional plus.

The first clip is an example of the PRS SE Custom 24 Roasted Maple’s basic sounds. It starts off with the humbuckers split:

The special edition PRS SE Custom 24 Roasted Maple Neck is a worthy addition to the company’s SE-range. If you’ve ever fancied a mid-priced PRS with a set maple neck, here’s your chance.

Thanks to DLX Music Helsinki for the loan of the review guitar! 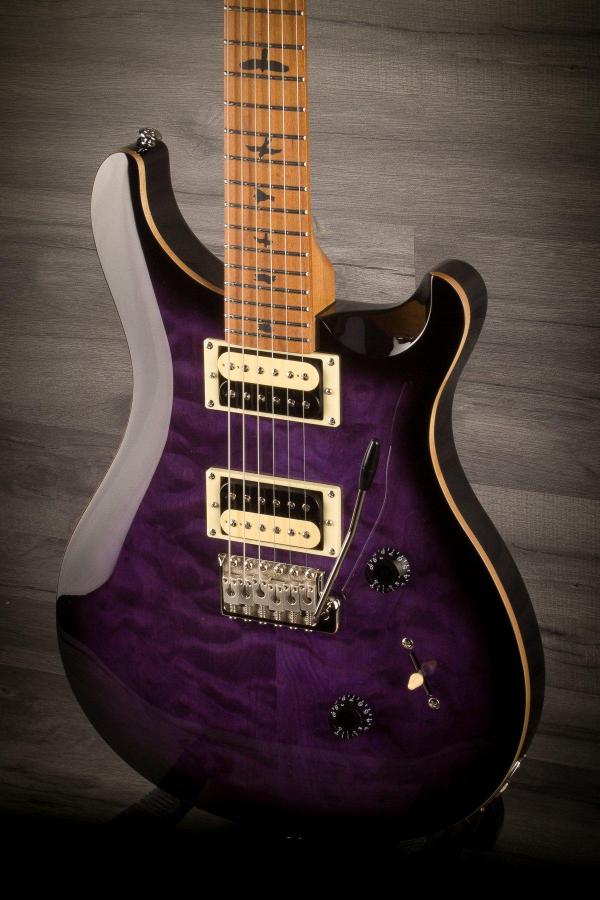