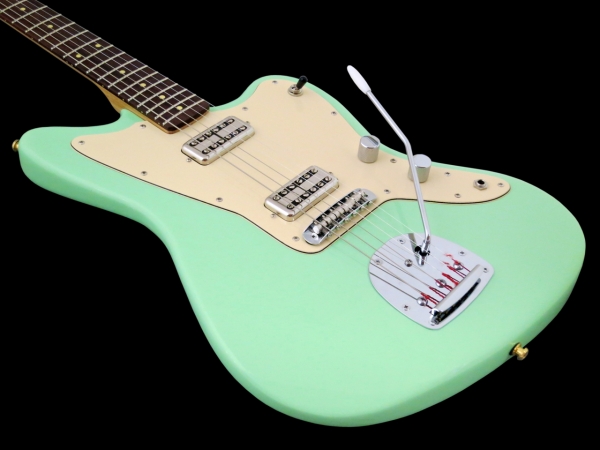 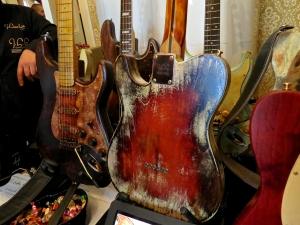 You could call J. Leachim Guitars Finland’s answer to Nash Guitars. Just like the American maker, JLG, too, don’t make their guitars from scratch, from the raw wood. Instead, J. Leachim assembles guitars from bought in unfinished necks and bodies, as well as parts and hardware sourced from a number of reputable sources. J. Leachim Guitars’ forte lies in their finish work, and the relicing of guitars.

The Jazzcaster’s maple neck has been sourced from Northwest Guitars. It’s a Tele-style neck sporting jumbo frets, as well as a modern fretboard radius of 9.5 inches.

The Guitarbuild body has been crafted from very lightweight swamp ash. Filtertron-sized pickup routs have been added at the J. Leachim workshop.

The body has received an exquisite, thinly applied gloss finish in Surf Green, while the neck has been finished with a thin satin clear coat.

The fretwork on the Jazzcaster is great. The rosewood fingerboard comes with 21 jumbo-sized frets.

The top nut has been carved from a piece of genuine bovine bone. Some may find the nut’s shaping a tad angular, but I don’t mind; it’s only cosmetics, after all. 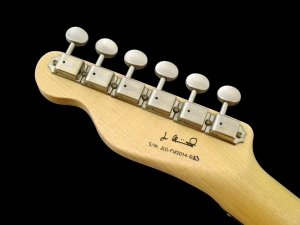 A nice set of lightly-aged Klusons takes care of tuning duties on this J. Leachim model.

The Jazzcaster’s bridge and vibrato tailpiece have both been sourced from WD Music:

The vibrato is a version of the Fender Jazzmaster/Jaguar-vibrato, albeit without the original’s lock-off mechanism. The original locking mechanism is notoriously difficult to set up properly, so leaving it off is actually a good thing (in the view of most guitarists).

Many guitarists today dislike the original Jazzmaster-bridge, too, because the individual height-adjustment screws on the bridge saddles tend to work themselves loose with modern (light gauge) strings. Originally, this bridge – as well as the vibrato – has been designed to work with the stiffer string sets of the late 1950s (mostly 012 or 013 sets). With a set of 010s or 009s the Jazzmaster-bridge’s adjustment screws tend to rattle a lot.

Many modern makers – like J. Leachim Guitars – substitute the Jazzmaster-bridge with a Fender Mustang-bridge for this very reason. The Mustang-bridge is a direct replacement, and it uses differently sized bridge saddles to preset the fretboard radius permanently, so nothing can work itself loose and rattle. 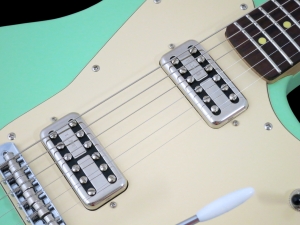 Gretsch Filtertron-style pickups are the ”in” thing at the moment.

J. Leachim’s Jazzcaster comes with a pair of TV Jones-pickups – there’s a vintage-type TV Classic in the neck position, and a more powerful Powertron model placed near the bridge.

The customer who ordered this particular Jazzcaster specified a reverse tone control (working clockwise), so this is what can be found on this instrument.

J. Leachim Guitars use a stereo phone jack, which keeps a firmer grip on the guitar lead’s plug, as well as making sure you always have a good connection to ground.

In my view, the J. Leachim Jazzcaster very successfully blends the ergonomics of the Jazzmaster body with a Gretschy tone. Thanks to its very smooth Jazzmaster-vibrato, the JLG Jazzcaster has a more open sound than, for example, a Cabronita Telecaster.

The Jazzcaster plays like a dream, as long as you’re willing to live with the typical, well-known compromises of the Jazzmaster/Jaguar-vibrato.

With modern, slinky strings, big bends – especially, when played higher up the neck – can quite easily make the high e-string jump out of its bridge groove. In a way this isn’t so much a fault, but more of a feature of this vibrato system, because the strings cross the bridge at a relatively shallow angle. With the stiff string sets of the late Fifties the system works fine, but for huge Blues bends with a contemporary 010-gauge set you should maybe invest in an additional bridge roller.

I would like to see a smoother taper on the tone control, though. On the review instrument the treble roll-off was more a matter of on or off, with everything happening right at the end of of the knob’s travel.

The Jazzcaster has a beautiful acoustic tone, with a bell-like ring and an open, yet firm body.

TV Jones’ acclaimed Filtertron-style pickups seem like a perfect fit for this model, adding a good deal of chime and twang, without sounding too bright or biting. Being humbuckers, the TV Jones pickups are also immune against hum and buzz, unlike a traditional Jazzmaster’s singlecoil units, which are not a million miles removed from a Gibson P-90.

This clip gives you an idea of the J. Leachim Jazzcaster’s clean sounds (starting with the neck pickup):

When plugged into an overdriven channel, the Jazzcaster wins you over with a chunky, aggressive and compact voice, which is just the ticket for Seventies-style Rock or Punk. Famous Filtertron-users in the Rock genre include AC/DC’s original rhythm guitarist Malcom Young, and the Who’s Pete Townshend, who frequently used Gretsch guitars as his ”secret weapon” in the studio.

Here’s the track from the Youtube-video – ”Seabird Flavour (Homage to Peter Green)”: 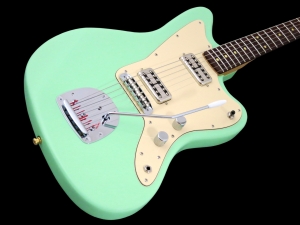 In my view, J. Leachim’s Jazzcaster is a beautiful, and very well-made, Fender-inspired guitar, with a sound that’s all its own. You could think the Jazzcaster was only for Jazz or Country, but in reality this fine guitar covers a much wider area of musical styles.

In any case, J. Leachim Guitars is yet another Finnish guitar brand worth keeping on your radar.