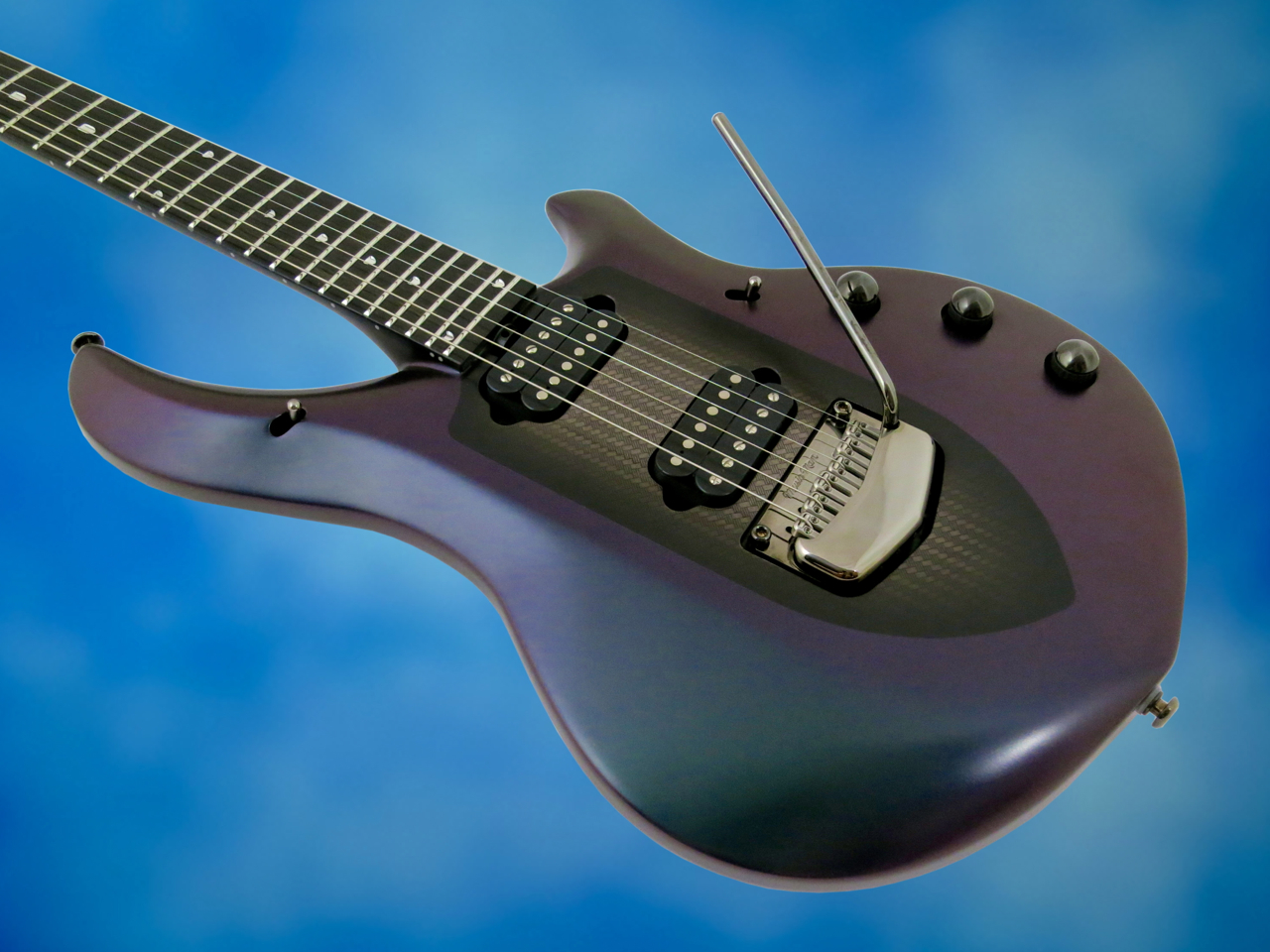 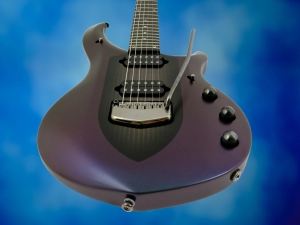 Dream Theater’s guitar wizard John Petrucci has a long and very fruitful association with Music Man. Over the years, the company has released several signature models, both US-made and as part of their less-expensive Sterling brand.

The first thing that will strike you about the new package is the sensationally low weight:

When I went to pick up the Music Man Majesty for this review (from DLX Music Helsinki), I had to open the case and check, because I suspected the guitar was missing. No, it really was in there…

Music Man’s Majesty (current price in Finland approx. 3,900 €) is a modern top-drawer signature model, which conveys the artist’s clear vision of what his dream guitar should be like. This isn’t simply a souped-up classic model – Petrucci and Music Man started with a clean slate.

Music Man’s new signature model is a Neck-Through design with a two-octave mahogany neck, and a very smooth neck joint at the 23rd fret. 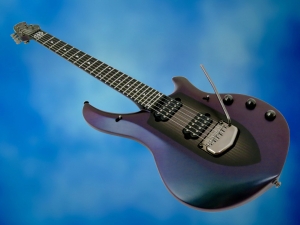 The Majesty’s body, too, is highly sculpted – you could call it streamlined – and it fits the player’s body perfectly.

The body wings, made from basswood, are capped by a maple top. The area on the top, which forms a sort of shield or crest, may look like graphite weave at first glance. In reality, this is a translucent area of the maple top, and what you see is a laser-etched graphic design resembling the look of carbon composite.

The review guitar’s finish is called Arctic Dream, which is a matte finish changing from violet to a dark green hue, depending on how the light hits the body. 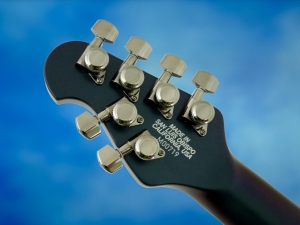 Below the compensated – and self-lubricating nut – you can see the metallic Dream Theater-logo inlay. 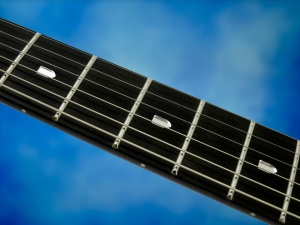 The quality of the fretwork on the Majesty is outstanding. We can find 24 jumbo-sized, stainless-steel frets installed into the ebony fingerboard.

The shield inlays are in fact tiny mirrors. 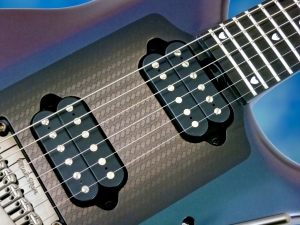 Music Man’s Majesty comes with a very dedicated, special switching system; the technically-minded among you can take a look at the schematics:

The three-way switch in the top horn lets the player select between piezo-only, magnetic-only, and piezo-plus-magnetic settings. 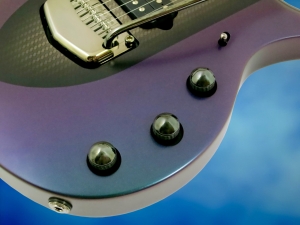 Beneath the strings you will find a second three-position toggle switch, that works as a pickup selector for the DiMarzios.

The control next to it is the volume control for the humbuckers. It also contains a push-push switch for engaging the Majesty’s active signal boost.

The second knob is a passive tone control, whose push-push switch works in the pickup selector’s middle position. ”Down” gives you the full sonic attack of two humbuckers, while the ”up” position switches off the outer coils of both pickups for thinner, more Fender-style sounds.

The third switch (near the output jack) is the volume control for the piezo signal. This knob sports a momentary switch, which allows you to reconfigure the output from standard mono – both the piezo and magnetic signals are sent to the same amplifier – to ”stereo”, enabling you to use a Y-cable to send the piezo’s output to a dedicated acoustic amp (or to a mixing console). 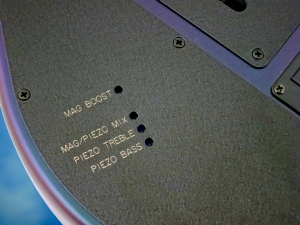 By using a tiny screwdriver you can adjust the active signal booster for the humbuckers, as well as set the maximum volume of the piezo signal, and the Fishman two-band EQ.

The Majesty’s active electronics are powered by a 9 V block. 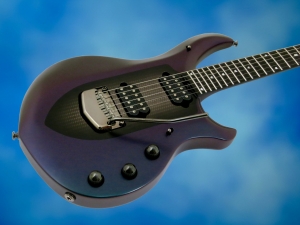 Some ”signature models” are only for posing. Others are simply souped-up, or slightly tweaked, versions of classic guitar models.

Music Man’s Majesty is one of the few instances, when a guitar hero had very clear and strong views regarding the look, the features, and the sounds of his dream guitar. Petrucci and Music Man set to work, and no compromises were accepted.

The Majesty is a fantastic instrument, and each guitar leaves the factory set up to Mr Petrucci’s exacting specifications. You get the exact guitar the master himself plays on stage and in the studio.

As already mentioned, this guitar is extremely light and comfortable, and balances perfectly on a guitar strap.

The neck profile is a relatively thin D. The satin-finished neck feels very fast and friendly, without being insubstantial.

Thanks to the jumbo frets and the flat fingerboard radius (17″) the Majesty is very bend-friendly. The action is low, but completely free of fret buzz (low-E: 1.7 mm/high-e: 1.6 mm).

The piezo system works great! It gives you a credible ”acoustic” tone in the context of a Rock or Metal band, and also comes in handy to ”freshen up” the Majesty’s magnetic signal (the clip has the following order:  piezo –> piezo + coil split –> coil split):

Here’s an example of the clean magnetic tones you can get from this Music Man. The powerful DiMarzio Illuminators are loaded with ceramic magnets (neck PU –> both (full) –> both (coil split) –> bridge PU):

The Majesty’s coil split and active boost give you three different degrees of distortion without even stepping on a single pedal. This clip has the coil split first, followed by the full middle position:

The active boost on this Petrucci-guitar is a great addition to any guitarist’s tool-pack, used here on the bridge pickup:

And, lastly, the audio track off the Youtube-video: 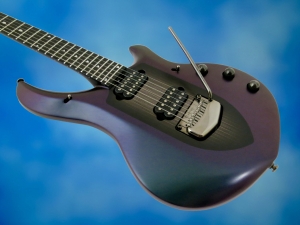 The Music Man John Petrucci Majesty is a top-grade signature guitar with an extremely wide array of sounds. In addition to the high quality and exemplary workmanship on display, the best thing about this guitar is that the Majesty’s features, its playability and its versatile sound also make it a great choice for many other guitarists, too.

A big thank you to DLX Music Helsinki for providing the review guitar!