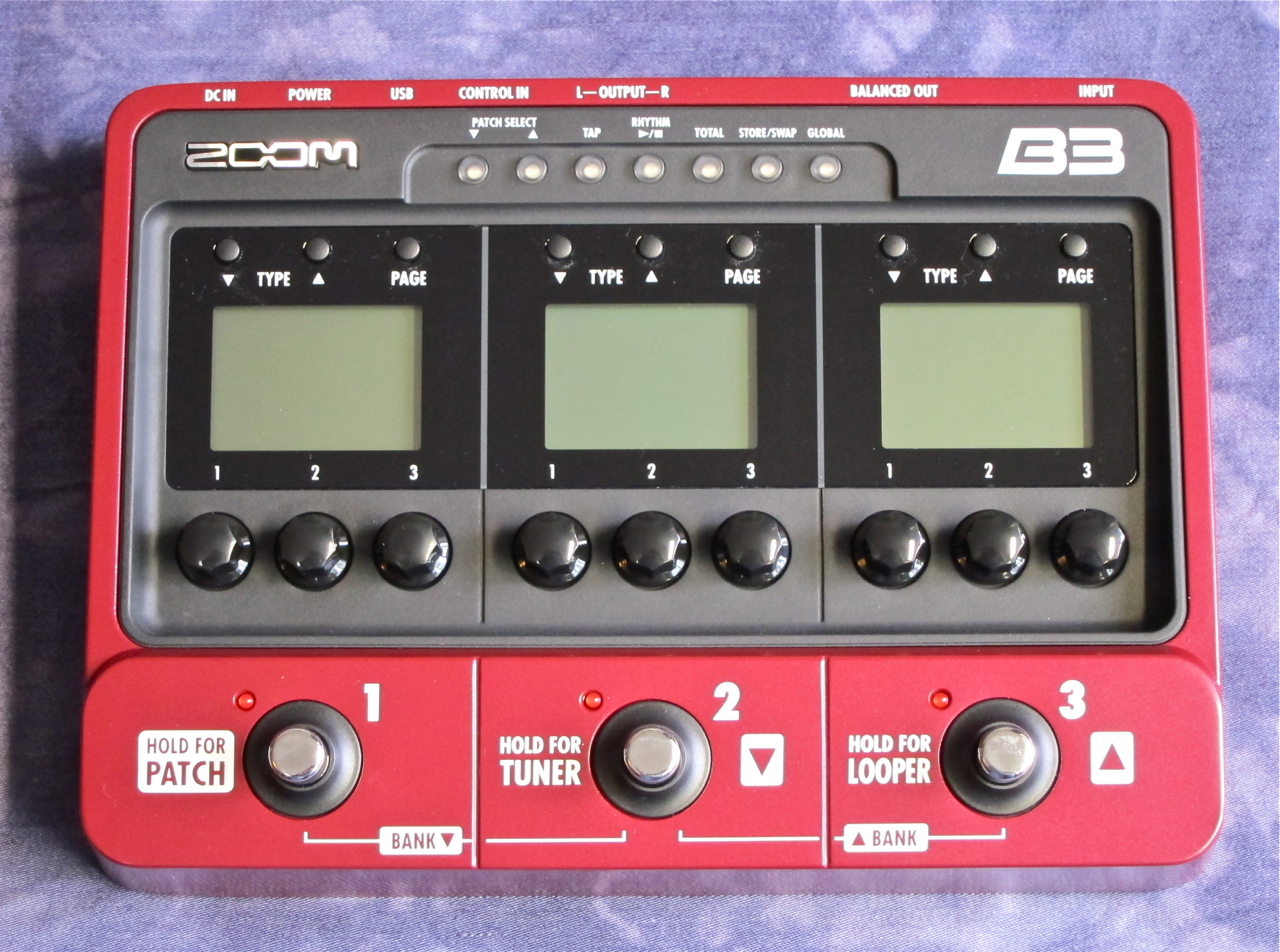 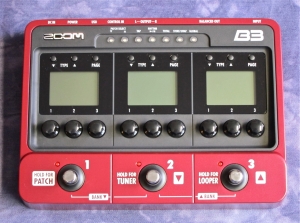 The red Zoom B3 (current price in Finland: 219 €) is a multi-effect for bass, and the bass equivalent of Zoom’s grey G3 guitar pedal.

Both effect boards are based on the same user-friendly interface and they share their basic structure. Central to the B3 is the idea to combine a huge palette of different effects with the ease-of-use of three traditional single-effect pedals side-by-side.

The Zoom B3’s offers astounding flexibility: each of the pedal’s three sections offers a whopping 111 different effect types, which can be assigned freely according to taste and personal requirements. The selection of effect types, as well as adjusting their parameters, is fast and easy thanks to the pushbuttons above each display, as well as the control knobs below the displays.

A chain of three effects is called a patch in Zoom-speak, with the B3 offering 100 freely programmable memory slots for patches. 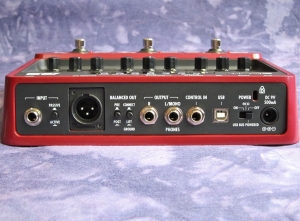 The back panel sports a surprising array of connectors: the input jack can be switched to accept high gain active circuits alongside traditional passive basses. The output jacks can be run in stereo or mono, and the left side jack also doubles as a headphones output. Additionally, the B3 also features a professional balanced XLR-output for direct injection into a mixing console. Using two small pushbuttons you can decide, whether to send the dry or wet signal to the mixer, and you can safely cut the ground connection to defeat hum from grounding problems. The USB-port can be used to exchange effect patches between the B3 and your computer (Win/Mac).

Additionally the Zoom can also be run as a USB-soundcard for direct recording into your sequencer.

There are three ways to power the Zoom B3 – using the supplied power supply, using four AA-batteries or utilizing USB-power. 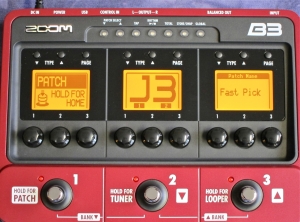 The Zoom B3 has two main display modes – Patch and Home. In Patch-mode you use the footswitches to select an effect patch. Using either the middle or the right side switch on their own you step down or up one patch at a time. You can also jump ten patches at once by stepping onto the left and middle or the middle and right footswitch simultaneously – this is as intuitive as it is quick.

Home-mode shows you the effects used in the chosen patch side-by-side, and the footswitches can be used to switch each effect on or off separately. Home-view is also the place where you can fine-tune each effect’s parameters or create a new patch from scratch.

I found the Zoom’s graphic design and user-interface really easy to use – the icons used for the effect- and amp-types give you a very good idea of where each effect is heading sonically, and the control settings in the icons follow the actual current parameter values.

As you can see in these pictures… 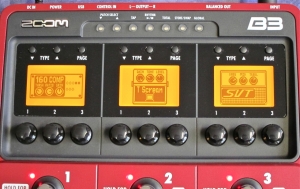 …the B3 offers a wide variety of different effects and modelled amplifiers. 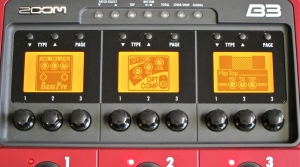 As compressors are an important part of many a bassist’s signature sound, this effect is offered in several different permutations, with each featuring its own tonal fingerprint.

In addition to its effects and amp models the red Zoom also sports a chromatic tuner, a simple rhythm box/metronome… 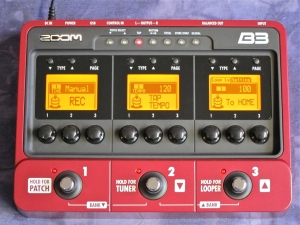 …an a 40-second looper, which can also be synched to the internal rhythm machine.

As a bonus Steinberg’s Sequel LE -sequencer (Win/Mac) is included in the box. Zoom also offers its own Edit & Share editor software for download, which runs on both Windows and Mac, and which enables you to edit patches, as well as share them with other B3-users.

In my opinion the Zoom B3 is a very well-designed multi-effect for bass, and one of the best units currently on offer in its price bracket. The effects on offer sound great and the range of different effects on offer is very broad. Being designed especially for bass, the B3 always preserves the signal’s punch.

The user-interface is very intuitive and easy to grasp – you can really enjoy the B3’s the wealth of different effects, because you get to grips with the unit straight away. Making your own patches is fast, easy and enjoyable.

This all makes the Zoom B3 a great choice regardless of your own musical preferences.

All examples have been recorded using my trusty Japanese Squier Jazz Bass, going via the XLR-output into Apple Garageband:

+ can be run on batteries