These prophetic words were spoken by Tom Jennings, the founder and head of Vox’ original parent company JMI, in the mid-1960s to his chief designer Dick Denney (pictured above).

Well before Marshall Amps arrived on the scene, Vox became the UK’s first legendary guitar amplifier brand. The original Vox AC30 was developed in 1959 as a larger version of the AC15 for the group The Shadows. Hank Marvin and Bruce Welch started having problems getting themselves heard over the ever-growing crowds they were drawing at ever-larger venues.

The first version of the Vox AC30 was a combo equipped with a single 12-inch speaker, but by the time the Beatles arrived on the scene the amp had evolved into what Vox called a ”Twin amplifier”, meaning a combo with a pair of 12-inch speakers. The Beatles were also the first band to receive AC30s with the company’s (then) new Top Boost -circuit. Vox couldn’t have dreamt up a more potent way of promoting their products than Beatlemania.

The AC30 Twin with Top Boost became Vox Amplification’s flagship product, which still stands today as one of the most iconic guitar amplifiers of all time. This is thanks in no small part to the great guitarists, such as Brian May (Queen), Rory Gallagher, Lenny Kravitz and U2’s The Edge, who made the combo a vital ingredient of their respective signature sounds.

Vintage AC30s (and faithful reissues) are often criticised for being quite large and heavy. Some 1960s examples also seem to have a tendency for overheating, due to the valve layout inside the chassis. Original AC30s also are non-master volume designs, which means that break-up and crunch sounds can only be had close to full volume levels.

The brand-new Vox AC30S1 (current Finnish street price around 780 €) takes everything that is great about the AC30, and puts it into a streamlined, master volume-equipped, and much more portable single speaker combo. 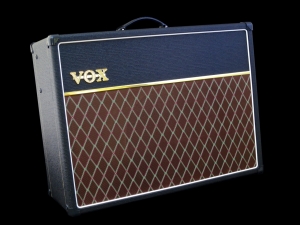 The AC30 Single keeps the classic Vox look, but comes in a narrower cabinet. At 24.5 kg the newcomer weighs a good nine kilos less that the Custom Series AC30 Twin (AC30C2).

The new combo offers a single amp channel with a two-band EQ-section and a master volume knob.

The built-in reverb is digital, and modelled after a classic spring reverb.

Just like the classic Sixties design the AC30S1 also sports a half-open back.

Vox’ Custom Series amps have been redesigned and updated to comply with all necessary safety regulations for modern tube amplifiers. In the AC30S1’s case this means well-ventilated valves that are easy to access, a safety grill to prevent anybody from touching piping hot tubes, and a detachable IEC mains cord.

The AC30S1 uses a pair of 12AX7 valves for the preamp section, as well as four EL84s in the power amp.

The speaker is a 12-inch Celestion VX model, designed specifically for use in this combo.

The back panel offers an additional speaker output (16 ohms) and an effects loop.

EU-versions of the AC30S1 also come with a switchable Eco-function, which will turn the amp off automatically when left running unplayed for two hours.

The brand-new AC30S1 is noticeably easier to lift and carry than any of the regular Twin versions, which is great news for virtually any of us.

A word of warning first:

Despite Vox’ promo pictures showing the new AC30 Single in different living room set-ups, this isn’t really a combo for noodling on the couch. Despite being a single 12-inch speaker combo, the AC30S1 has no problem whatsoever in dishing out ear-shattering sound pressure levels. Yes, there is a master volume knob, but – at least on our review sample – the pot’s taper isn’t especially even, instead jumping rather abruptly from ”off” to something like 30 percent power. This combo doesn’t belong in a block of flats or in a sitting room, this amp belongs in a full-blown studio or on a club stage.

Despite the inevitably narrower throw of a single speaker (compared to a twin speaker set-up) the sounds gleaned from the Vox AC30S1 are pure AC30 magic. Typically, clean headroom isn’t available in Fender Blackface-style amounts. An AC30’s sound is defined by the smooth and steady break-up at comparatively moderate gain levels, and by the bite and density of its crunchy distortion.

Here’s an example of the range of textures you can get from the AC30S1 with its gain at full, while using a Stratocaster’s volume control:

• We Will Rock You – Fender Stratocaster

• Pride (In The Name Of Love) – Fender Telecaster & Stratocaster

Any delays were added during mixing:

In my view the new Vox AC30S1 is an excellent addition to the company’s AC30 range. This combo gives you virtually all of the classic Vox tones, but with far less bulk.

Thanks to DLX Music Helsinki for the loan of the review amp!