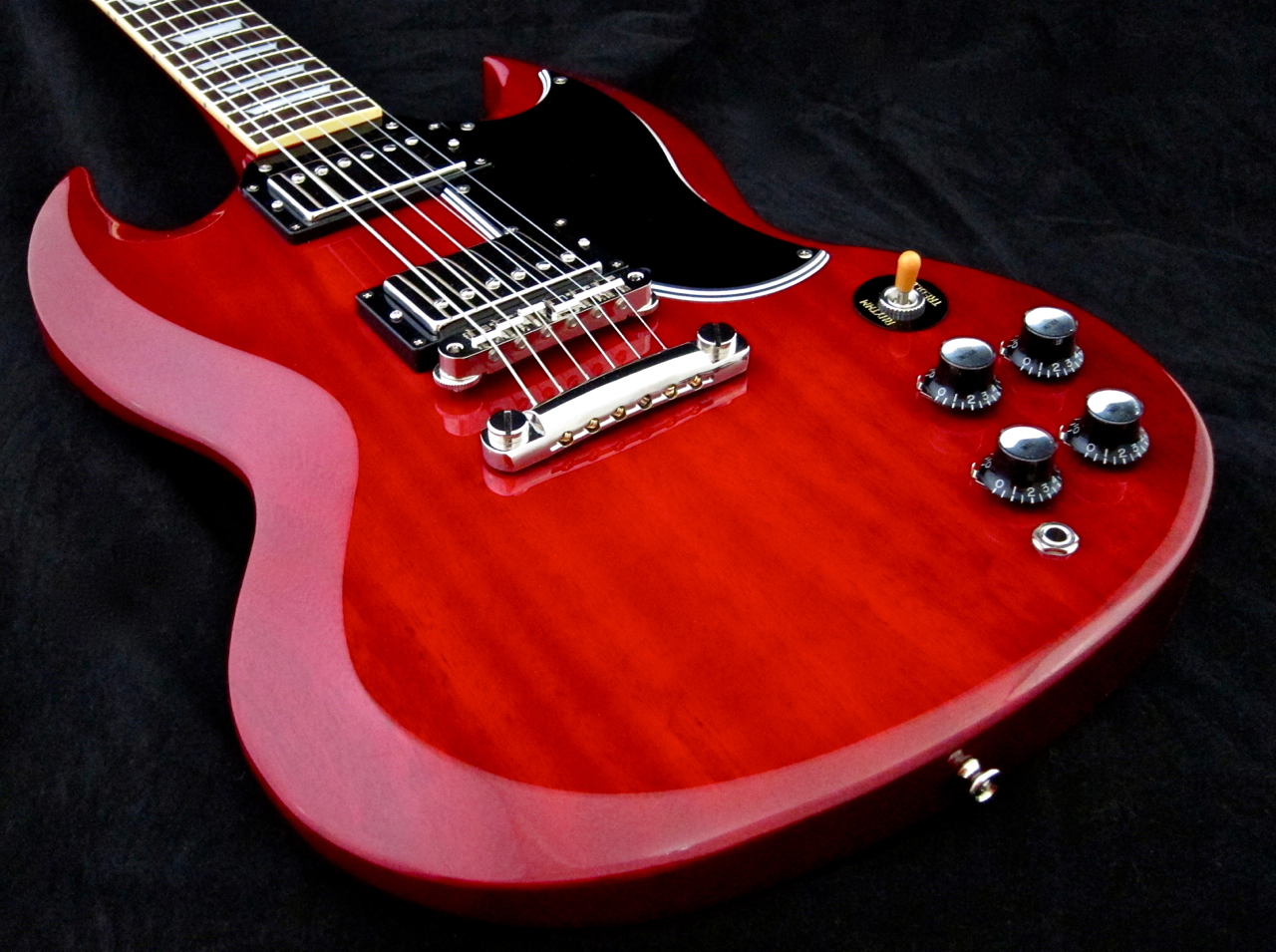 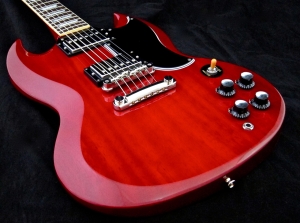 Tokai Guitars’ SG-75 is the company’s top model in their line of Gibson SG copies – a carefully crafted, Japanese version of the American original from the 1960s.

The Tokai SG-75 (current price in Finland: 928 €) is based on the first version of the Gibson SG, which was introduced in 1961 as the new Les Paul Standard guitar. At that time the original Les Paul -range started showing seriously flagging sales figures, so Ted McCarty instigated a complete rethink of Gibson’s main solidbody model. The idea was to create a sleeker and lighter guitar.

Mr Paul wasn’t pleased with the result and didn’t renew his endorsement deal, which is why the new model was renamed the Gibson SG (= Solid Guitar) in 1963.

Tokai’s SG-75 is a great recreation of the classic model, and stays very faithful to the original design, displaying exemplary attention to detail in the process.

Take the body, for example: Its two pieces of fine mahogany have been matched so well it took a magnifying glass to make out the glue line at all! The well-applied red dye and the expertly executed thin finish really show off the guitar’s curves, as well as the nice grain of the wood. 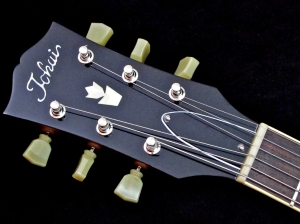 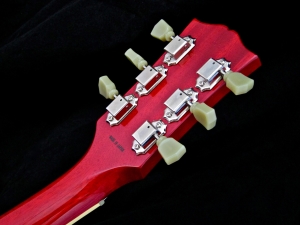 Vintage-style tuners are a tasteful choice for the SG-75 model. 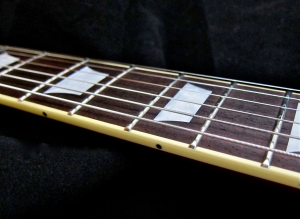 The rosewood fretboard is bound in single-ply cream plastic, and sports the traditional ”crown” inlays associated with guitars of this type. The workmanship on the frets can only be called exemplary. 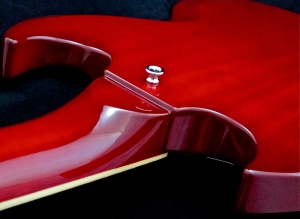 The neck joint on the Tokai SG-75 sits – as tradition dictates – at the last fret (22nd). This arrangement gives you unhampered access to the uppermost frets, but the trade-off is a slightly weaker neck joint in comparison to, say, LP-style guitars. Buying a secure guitar stand and a quality hard case for this type of guitar is a very good idea. 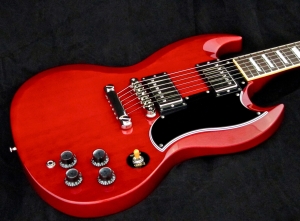 In terms of its pickups, controls and hardware the Tokai SG-75 is a typical Gibson-type guitar. 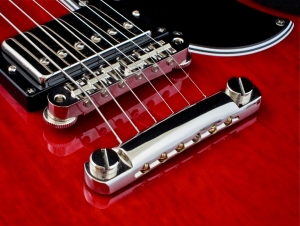 The bridge is a modern update of the venerable Tune-o-Matic-bridge: The intonation adjustment screws are properly secured to the bridge’s base. On 1960s originals only a flimsy retaining wire keeps the saddles from falling off mid-song, should you break a string. 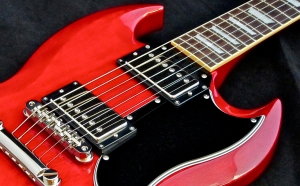 The neck pickup has been moved a good two centimetres away from the end of the fretboard to add a little strength to the neck joint. In order to keep the tonal difference between the neck ’bucker and the bridge unit as wide as possible, the bridge humbucker has also been moved a few millimetres closer to the bridge. 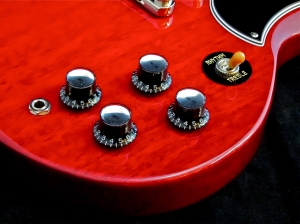 The control set-up is also pure SG, with the three-way toggle, the four controls (two volumes, two tones) and the output jack all crammed together in the lower bout.

Using an angled plug is a very good idea on SG-type guitars, as it reduces weight-induced stress – and thus breakages – on the rather thin area of mahogany routed out around the jack. 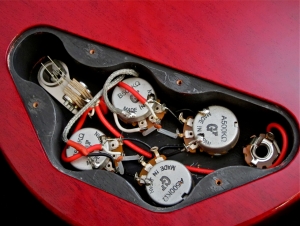 One word says it all – quality! 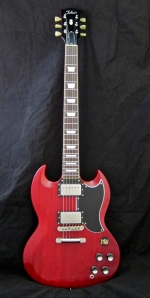 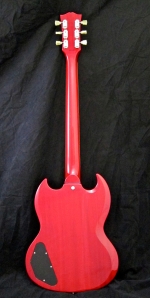 Vintage 1960s examples of Gibson SGs all feature rather thin necks, many (from about 1966/67 onwards) of which also have a narrower nut width. Some guitarists – like Angus Young – actually prefer these necks, but for many others this type of neck profile is simply too insubstantial.

Luckily, Tokai have decided not to paint themselves into a corner here: The neck profile of the SG-75 is a nice, not-too-chunky D, which is a tad more muscular than Gibson’s current 60s-profile.

In addition to the improvement in playability there’s also an improvement in tone and sustain to be had from slightly bigger necks on SG-style guitars. More wood means added stiffness and less damping due to vibrational absorption in the long, unsupported neck.

The extremely lightweight Tokai SG-75 is a fine example of how an SG-style guitar differs from a LP-type in its acoustic and electric tones. The acoustic tone is a good deal more open, and it displays a lovely vocal mid-range timbre, as well as a slightly lighter bass response. The SG-75 feels very alive and is brimful of dynamic nuances.

Tokai’s fine PAF-Vintage Mk3 -humbuckers work exceedingly well in this context, because these vintage-type, moderately-powered pickups have an open and dynamic sound, and don’t clog up the guitar’s mid-range frequencies.

The more ”trebly” pickup placement does its bit to underscore the SG-75’s clear and crisp acoustic tone. The bane of LP-type guitars – the muddy neck humbucker sound – is, thankfully, completely absent here, and the bright and airy top end of the bridge pickup will make you think twice about an SG’s suitability for traditional Country music.

Here’s the Tokai through an overdriven channel:

And here’s the music from the video: 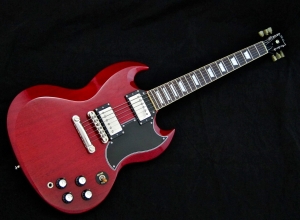 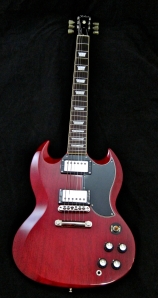