Hagström Guitars’ new models, which had been announced at Frankfurt Musikmesse 2013, have finally arrived in Finland a few weeks ago!

Kitarablogi had the pleasure of receiving two of these guitars for testing:

The Viking P is a new version of Hagström’s very popular semi-acoustic, and it comes equipped with two Custom P-50 singlecoil pickups. 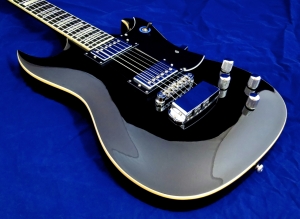 The Pat Smear Signature is a solid-body electric tailored to the Foo Fighters-guitarist’s needs.

The Hagström Viking is probably the company’s best-known guitar model, not least because of Elvis Presley’s use of a Viking during his legendary ’68 Comeback Special TV show.

The brand-new Hagström Viking P (street price in Finland around 650 €) adds a pair of P-90-style singlecoils to the mix.

The Viking P’s maple neck is glued into the body, which is made in traditional style from form-pressed plywood maple.

A solid wood centre block – made of what looks like nato or meranti – runs the full length of this instrument.

Graph Tech’s self-lubricating Black Tusq-material has been chosen for the Viking P’s nut. 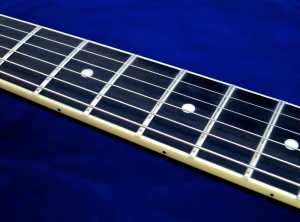 The deep black fingerboard of the Viking P has been crafted from Hagström’s proprietary Resinator-material, which is a composite of birch fibres and resin. Resinator aims to be a man-made alternative to ebony, offering similar properties in terms of stability, looks and sound.

The ’board sports 22 medium-sized frets, which have been installed cleanly and finished well. 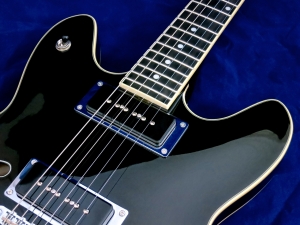 Hagström have chosen a stylish and practical way of installing their own Custom P-50 pickups on this semi:

Instead of opting for traditional, so-called dog ear covers, which are screwed to the guitar’s top, the Viking P comes with two black soap bar units. Originally developed for solid-body guitars, soap bar pickups offer the advantage of height adjustment via two Phillips-head screws placed between the adjustable pole pieces. With traditional dog ears the only means of adjusting pickup balance is by using the pole pieces – and often this leaves the bridge unit sounding a tad weaker than the neck pickup.

The three-way toggle switch has been placed on the Viking’s top horn.

The solid centre block cuts down feedback howl very effectively, and it also allows for the use of sturdy hardware.

The control setup is traditional, offering separate volume and tone pots for each pickup.

The Hagström Pat Smear Signature (street price in Finland around 670 €) takes the company’s F-200-model as its starting point.

Pat liked the general shape of the F-200, but requested a thicker mahogany body with a bound maple top. In terms of thickness, we’re talking similar dimensions as on a PRS Guitars Custom 22, for example.

Any way you look at it – the Hagström headstock sure looks classy.

Pat Smear’s signature can be found on the back of the headstock.

It’s a Resinator fingerboard with 22 medium-sized frets on the Smear Signature also, but the position markers are large pearloid blocks here. 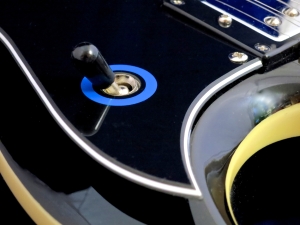 A special feature of this guitar is the toggle switch installation through a hole in the pickguard.

Even though the Pat Smear Signature isn’t equipped with a vibrato, the guitar comes with a roller bridge to ensure maximum tuning stability and string life.

Hagström’s idiosyncratic tailpiece is made up of six brass string retainers mounted onto a plexiglass plate.

There are four controls on the Smear-model, instead of the F-200’s single pair of master volume and master tone.

Both review guitars come with high-quality switches and pots.

Both review guitars suffered from a very slight bout of fretboard shrinkage due to dry weather conditions. It seems that Hagström’s Resinator composite doesn’t only look and feel like ebony, but also reacts to changes in air humidity in a similar fashion. Fretboard shrinkage isn’t a real ”fault” per se, but rather something that happens to a large proportion of new guitars. Luckily, your friendly guitar repair shop can take care of the sharpish fret ends easily and inexpensively.

The Hagström Viking P is of medium weight, and balances well in the lap or on a strap.

The neck profile is a flattish D, which feels great.

Straight out of the shipping-box the setup was spot-on. The Hagström Viking P comes factory-equipped with a 010-gauge string set. Thanks to the flat (15″) fingerboard radius and the low action (low E: 1.9 mm/high e: 1.6 mm) this Viking is a really comfortable player.

Due to its semi-acoustic build, the Viking P’s unamplified voice is quieter and closer to a solid-body than the acoustic performance of all-hollow thinlines, such as the Gibson ES-330 or the Epiphone Casino. Acoustically, the Viking P sounds clear and fresh.

Hagström’s fantastic Custom P-50 pickups add a nice shot of warmth and roundness to the mix, without clouding the Viking’s inherent clarity and dynamics.

There are great clean sounds on tap:

But the fun doesn’t end there, as the Viking P also delivers when it comes to the crunchy side of things, with its fat midrange and dynamic punch:

Due to the physical limitations inherent in single-coil pickups, high-gain sounds are always a somewhat tricky endeavour in P-90-equipped guitars. The sound is really great, but you have to decide for yourselves how much how much hum and buzz you can stomach:

This guitar’s neck is a slightly more rounded affair, when compared to the neck profile on Viking P, making it feel even better, in my opinion.

Again, the setup was great straight out of the box – a low action, such as the one on the Smear Signature (low E: 1.6 mm/high e: 1.4 mm), only works as well as it does here when the frets are level. This guitar plays like a dream.

Acoustically, this Hagström speaks with a strong and clear voice. The Smear-model features a healthy attack coupled with long and even sustain.

I really like Hagström’s vintage-voiced Custom 58-humbuckers, because their moderate output level leaves enough room for the guitar’s acoustic clarity and dynamics to shine through:

The crunchy tones of the Pat Smear Signature manage to combine clarity and Rock-muscle in a very appealing fashion:

These new Hagström-models are very welcome additions to the company’s range of models.

Of these two, the Viking P leans somewhat more in the vintage direction tonally, dishing out a delicious and rootsy P-90-fuelled alternative to Hagström’s regular Viking. The Pat Smear Signature is a signature model that can work for many friends of double-humbucker solid-bodies, even if you’re not familiar with the man’s oeuvre.

In any case, both Hagström-models are quality instruments at prices even the amateur can afford.

A big thank you to DLX Music Helsinki for supplying the review instruments! 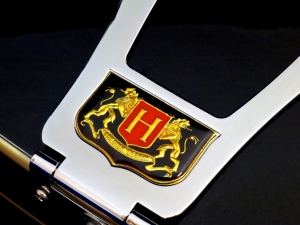