Italia is a new brand on the Finnish market, even though these guitars have been available in many EU-countries for 15 years already. Italia Guitars is the joint effort of South Korean guitar factory Mirr Music and British guitar guru Trev Wilkinson. Wilkinson’s list of achievements is long and illustrious, including inventions such as the Wilkinson-vibrato and his roller nut, as well as instrument designs for Vintage (by JHS) and his own Fret-King brand.

The basic concept behind Italia Guitars is to come up with instruments that are imbued with the quirky charm of European electric guitars from the Fifties and Sixties, but which feature up-to-date playability and reliable electronics.

The Italia Maranello Classic (price in Finland around 640 €) is this brand’s best-known model, which has even found its way into the hands (and heart) of British songwriter and slide guitarist Chris Rea.

This model takes its inspiration from Hagström’s first solidbody electric, the P46, which has also been sold in North America under the Guyatone banner. In terms of its looks, the Maranello is a dead ringer for the P46, but the Italia’s electronic department clearly has been streamlined to make it a more sensible affair.

The Maranello Classic is quite a looker, sporting many hallmarks of classic Sixties designs.

The agathis body’s curved front comes in a gold sparkle metal finish, while the back of the body, as well as the neck, have received a pearloid coating. 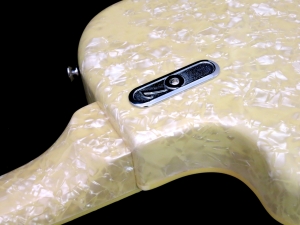 The maple neck is screwed onto the body with two screws, which can be found beneath a snazzy cover plate. 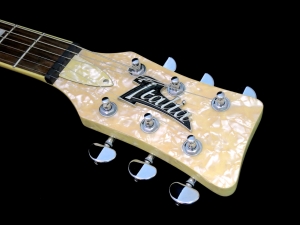 A truss rod access at the headstock end, as well as a self-lubricating top nut are distinctly modern features… 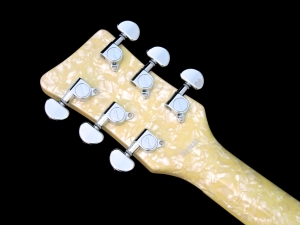 …as are the Maranello’s sealed tuning machines. 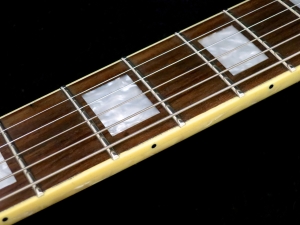 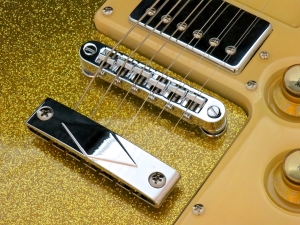 This Italia comes with a modern, Wilkinson-branded tune-o-matic bridge. The tailpiece, which rests on ferules, has been lifted straight off the old trapezes used in some Gibson- and Epiphone-semis. 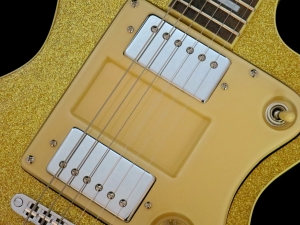 The Maranello Classic comes equipped with a pair of Wilkinson WVC-humbuckers, which are Trev Wilkinson’s own version of the legendary PAF-humbucker. 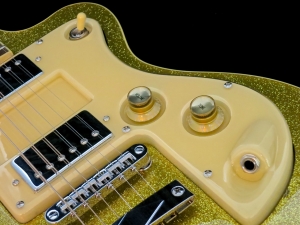 All of the electronic parts on the Maranello – pickups, controls, and all – have been mounted onto a large cover-plate made stiff plastic, which is height adjustable, thanks to being suspended on top of metal springs.

This is an idea originally used on the Hagström P46. Italia Guitars are using a smaller, oval version of this – holding only the pickup switch, as well as the controls – on some of their other models. 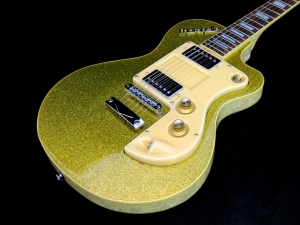 Italia’s Rimini 6 (price in Finland around 645 €) is rather reminiscent of the Rickenbacker 360, although it isn’t a straight copy of this classic guitar at all .

The Rimini 6 has a semiacoustic body made from solid agathis. The body blank is then routed out from the back, creating large cavities to both sides of a solid centre block. The body is then completed by glueing on a solid ash back.

Our review sample comes in a very fetching ”black” pearloid finish (some would call it ”bowling ball” or ”mother of toilet seat”), but you can also get your Rimini in a traditional colour finish, such as sunburst (sans the pearloid). 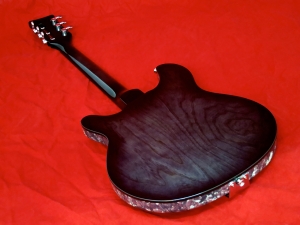 The black sunburst finish of the Rimini’s back shows off its beautiful grain nicely.

The model is built with a set maple neck. 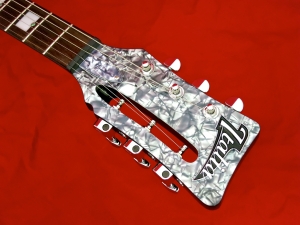 The headstock on the Italia Rimini 6 doffs its hat in Rickenbacker’s direction: 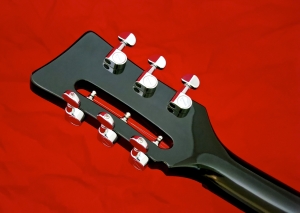 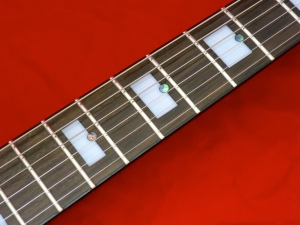 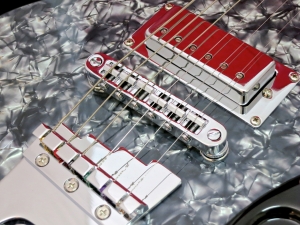 The Rimini 6 is equipped with a modern version of the tune-o-matic bridge, too. 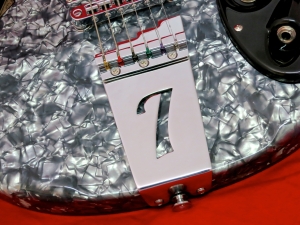 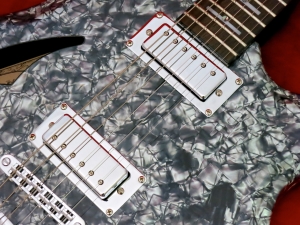 I believe we can expect to hear some suitably fresh tones from the Rimini 6’s alnico-powered Wilkinson WMC-minihumbuckers. 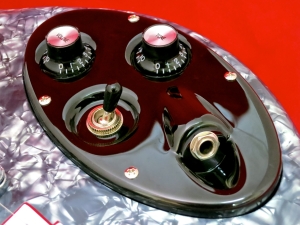 The guitar’s controls comprise a three-way toggle switch, as well as controls for master volume and master tone. 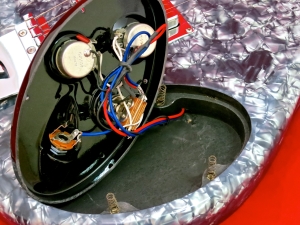 Removing the plastic tray gives us a good look at Italia’s clean workmanship and the very decent components used. 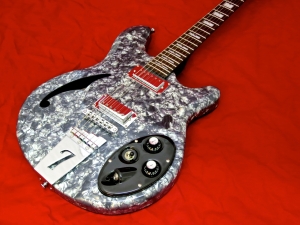 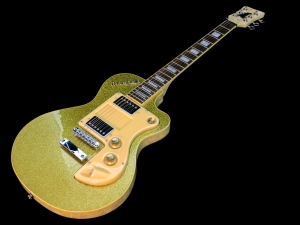 The Italia Maranello Classic has a shape and weight similar to a Gibson Les Paul, even though the Maranello features a slightly longer scale (63.5 cm/25″). Depending on your playing style, the placement of the toggle switch right beneath the neck pickup might lead to some involuntary pickup switching, at least in the very beginning.

I really like this guitar’s fat and round D-profile, giving you something to hold on to.

The Maranello Classic had received a pro setup (at Guitarworx) before leaving R-Jam Group’s headquarters, which resulted in a very comfortable action (E: 2.0 mm/e: 1.4 mm) without any annoying rattling.

The Maranello’s acoustic tone contains more than a hint of semi-style hollowness, no doubt thanks to the large pickup and electronics routing and the huge plastic scratchplate/tray.

Some of this open acoustic character is also carried over into the Maranello Classic’s amplified sounds, which adds a welcome degree of liveliness. Wilkinson’s alnico-equipped WVC-humbuckers have a nice vintage-style tonality at moderate output levels.

Modern Metal- and Hard Rock-styles aren’t probably the best environment for this Italia-model, because the Maranello’s large plastic cover tends to add a slight bit of microphonics. On the other hand, I don’t think this guitar is aimed at the Thrash-metaller. Instead, the Maranello Classic is a great guitar for classic Blues, Rock, Jazz and Pop! 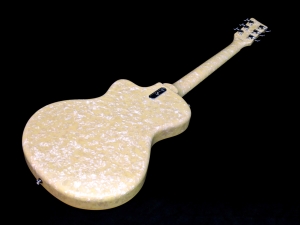 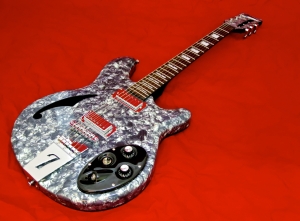 Wow, what a compact and lightweight guitar! The Rimini 6 feels great, both played seated and standing up with a strap, and balances very nicely.

The neck has an oval, C-type profile, and comes with a Rickenbacker-style scale (62.8 cm/24.75″). The medium-jumbo frets, as well as the great setup and low action (E: 1.9 mm/e: 1.3 mm), result in a very light and fast touch, turning this guitar into a natural extension of the player’s body.

Like the P-90, a minihumbucker could be described as a sonic compromise between a Fender-style singlecoil and a full-blown humbucker. The minihumbucker’s great advantage over the P-90 lies in the former’s immunity against electromagnetic interference.

This Italia has fine ringing tone with a piano-like attack, which is never brittle or grating. These Wilkinson-pickups sound fantastic and offer enough output to take you from authentic Sixties-sounds (think Beatles, Byrds and early Who) all the way to more grittier stuff (think Paul Weller or Peter Buck). 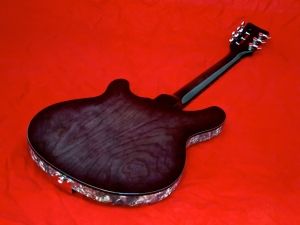 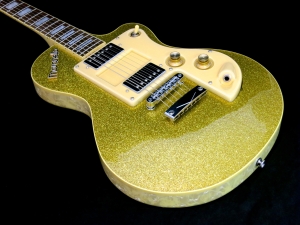 Italia Guitars’ Maranello Classic ja Rimini 6 are quality instruments, which manage to combine vintage looks and quirkiness with easy playability and great tone.If you’re on the lookout for a cool guitar off the beaten track, you should really give one of these Italia-models a try! 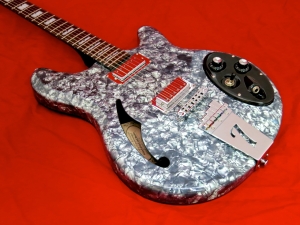 – small dark spot in finish next to output jack