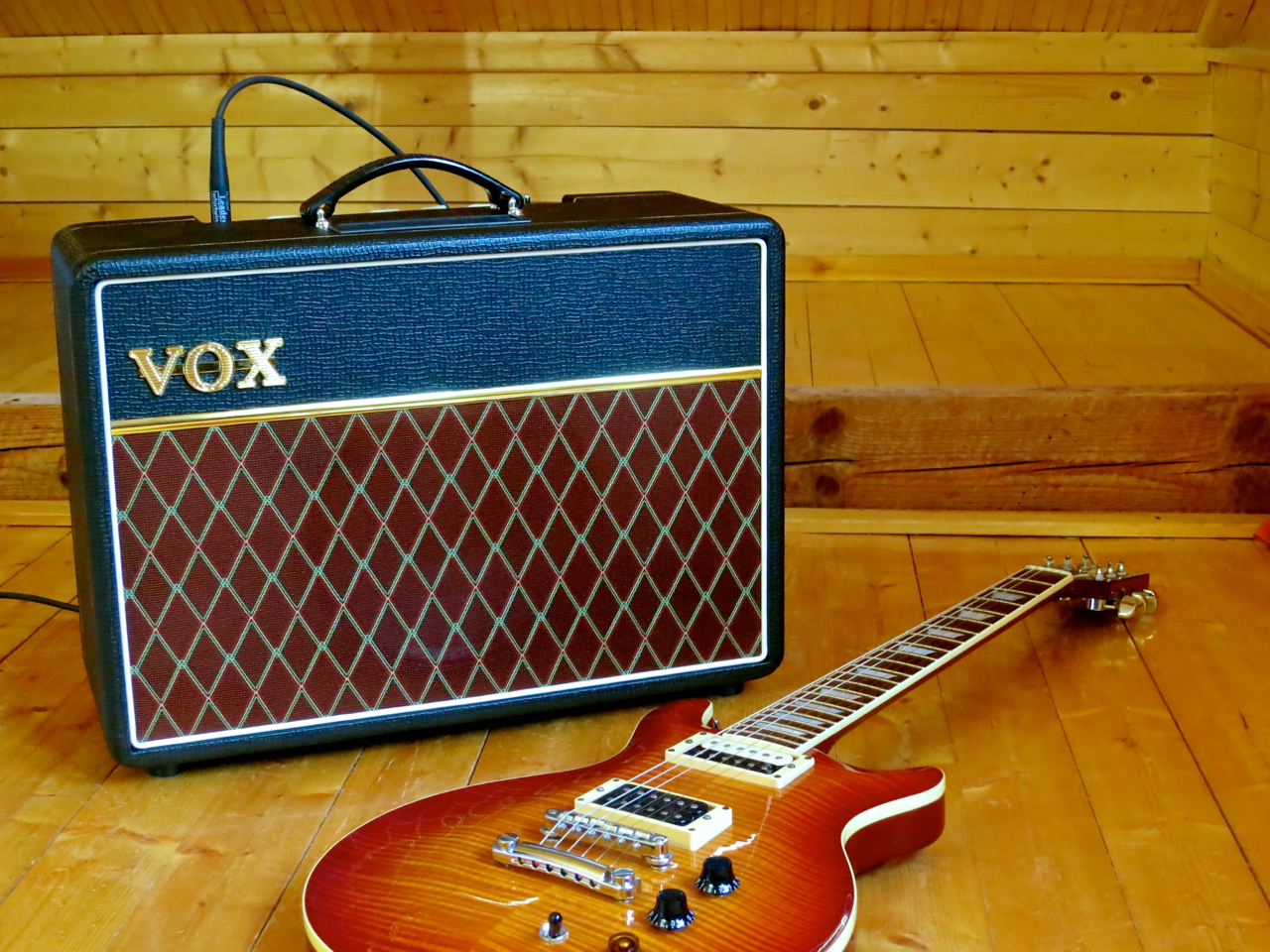 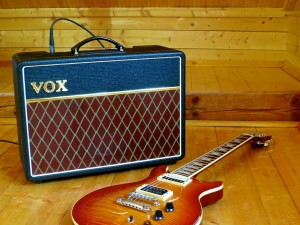 The new Vox AC10C1 combo amp nicely bridges the gap between the Custom Series’ AC4C1 four-watter and the 15-watt AC15C1. 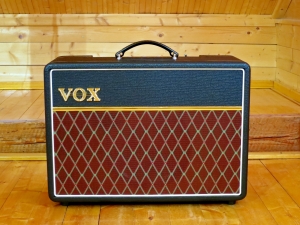 The Vox AC10C1 (street price in Finland approx. 520 €) isn’t a copy or reissue of any of the AC10 versions from the 1950s or 60s, but rather a modern reinterpretation of the company’s Top Boost-theme in a more compact guise, and made in China, just like the rest of the Custom Series.

This being so, the new AC10C1 amp does away with the old version’s vibrato effect, adding instead such welcome modern features as a quality digital reverb, and separate Gain and (Master) Volume controls. 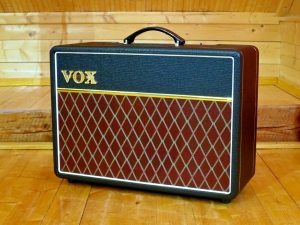 Vox’ new combo looks like a smaller version of their legendary AC30 combo, which isn’t a coincidence, I’m sure. It sports lots of black vinyl, white piping, a golden metal rail, and the famous maroon front cloth with the diamond pattern.

The AC10C1 only weighs 12 kilos, which means it’s very easy to carry by its single top handle.

As we are looking at a production line, Chinese valve amp, it would be totally unrealistic to expect hand soldered point-to-point wiring inside this combo. The AC10C1’s electronic components – tubes and all – are mounted on three PCBs. You can have a good looks at this combo’s innards in this picture.

The little Vox’ two EL84 main amplifier valves have been placed just beneath the ventilation grille on the top (next to the handle). The preamp valves – a pair of 12AX7s – get their ventilation via a small slot at the bottom end of the cabinet’s back wall.

In addition to Gain and Volume, you will find a two-band EQ section, and the reverb control. 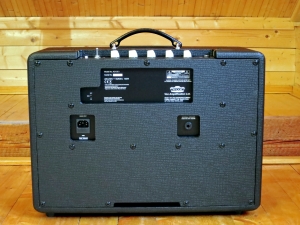 In practical terms, the Vox AC10C1 is a closed-back combo, despite the small opening for preamp tube ventilation.

A ten-inch Celestion VX10 has been chosen as the combo’s sole speaker. 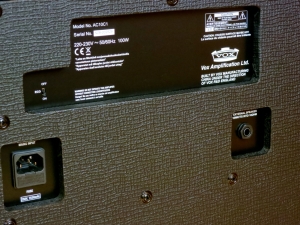 In the EU the new combo is sold with an Eco-feature. When the Eco-switch is set to ”on”, the AC10C1 will power off automatically if the amp isn’t played for two hours.

The AC10C1 can be connected to an external speaker cabinet, as long as the load is kept to 16 Ohms. 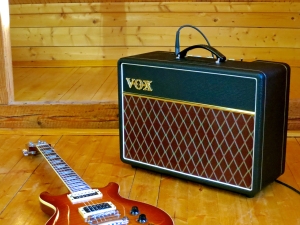 Let me say something about the Vox AC10C1’s volume first:

This little amp is quite the belter for a combo rated at only 10 Watts! Yes, it does have a master volume control, but I still wouldn’t recommend using this Vox as a living-room amp in an apartment block. The Volume control really has to be set to 10 o’clock, or higher, to make this baby come to life.

The basic character of this Vox combo is rather bright and bitey – I had to take the Treble knob down to below 10 o’clock to find the sounds that I like.

This AC10C1 doesn’t have oodles of clean headroom, still there are some very nice clean tones to be had in the first third of the Gain control’s range, when you use Fender-type single coil pickups (Fender Stratocaster; amp gain at 10 o’clock):

Many valve amp snobs will view a digital reverb circuit as a big no-no, but in my view, the AC10C1’s reverb is one of the very best I’ve ever heard in an amp in this price range. The reverb is a digital version of a spring tank, and has a charming sense of depth. At higher settings you can even get some ”spring splash” by attacking the strings with gusto:

Due to its higher output a P-90-type pickup will require you to adjust the volume knob(s) on the guitar, if you want to achieve genuinely clean sounds. Here’s a clip of an Epiphone Casino (with Göldo P-90s), with the guitar’s volumes turned about halfway down (amp gain at 9 o’clock):

Here’s the same Casino with its volume controls set to 8 (the amp settings stay untouched):

Humbuckers, too, mean you will have to turn the guitar down a bit for clean sounds, otherwise the AC10C1 will start adding some of that famous Top Boost grit. The first clip uses a Hamer USA Studio Custom with its volume controls turned down to 5 (amp gain at 9 o’clock):

Same guitar, same amp settings, but the Hamer’s volumes have been set to 7:

You could sum up the AC10C1’s distorted sounds with one word – classic! This isn’t a high gain combo by no stretch of the imagination. This Vox feels most at home with Pop-, Blues-, and Rock-sounds of the Sixties and Seventies (and their modern descendants). If you want a piece of that classic Vox Top Boost tone (think Beatles, Queen, U2), the AC10C1 has it in spades at manageable volume levels. 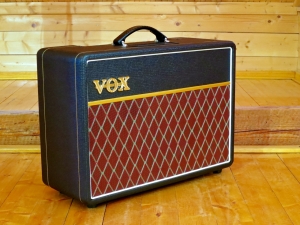 In my opinion, the Vox AC10C1 is just the ticket if you’re after genuine Vox tones in a compact, easy-to-handle package.

Clean headroom isn’t to be had in abundance, but luckily this Vox combo reacts extremely well to volume changes on the guitar. The sound cleans up nicely, while the amp retains its full vigour and liveliness.

The Vox AC10C1 is loud enough for most rehearsal situations, and you might even use it in some small venues without a mike.

For studio work, too, I feel Vox’ AC10C1 has a lot to offer, because it enables you to get chunky Vox tones with much less bleed-through into other microphones, like the drum mikes.

A hearty ”thank you” goes to DLX Music Helsinki for the loan of the review combo!