Manne Guitars is a high-end guitar company from northern Italy, who isn’t afraid of doing things in their own special way.

The Manne Ventura uses korina for the body. The neck features Manne’s special construction – maple with a centre strip of laminated beech. The long-scale instrument (64 cm/25.2″) has a Resin-F-fingerboard and Dunlop’s 6110 jumbo frets. 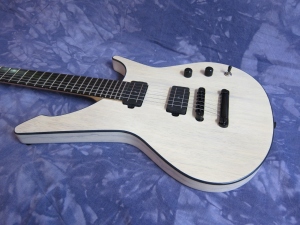 Both the volume- as well as the tone-control feature push/pull-switches, with the down position giving each humbucker wired traditionally, that is with the coils in series. The up position wires the coils in parallel, which results in a slightly brighter tone.

There were a few smudges of satin white finish on the black body binding of the review sample, which isn’t quite what you’d expect in a guitar of this price.

The control cavity, on the other hand, is truly exemplary, both in its cleanliness, as well as the thorough shielding.

Manne’s Ventura Satin is a very light and well-balanced guitar.

The neck profile may prove to be a dividing factor – some will love it, some may hate it. The Ventura’s slightly asymmetrical profile is reminiscent of a fatter version of Ibanez’ famous Wizard-neck. For some the feel will be too wide and angular, for others this neck is the only way to fly. Check it out for yourselves!

The Ventura’s sounds are excellent with a capital ”E”. Somehow Manne Guitars have managed to construct quite powerful humbuckers, which still posess amazing clarity. Switching over to parallel-mode gives you distinct sounds with more brightness, but without annoying drops in output and without pickup buzz.

Here are some example sounds:

Manne Ventura – clean – both pickups with neck-PU in parallel

Manne Ventura – drive – both pickups with neck-PU in parallel

Manne Guitars’ Ventura Satin is a fantastic instrument. It’s the perfect choice for guitarists, who like a contemporary guitar with bold styling and well-designed features.

– some finish smudges on binding