Vox’ legendary Sixties guitars, the Mark III and the Mark V – aka the Vox Teardrop (Mark III) and the Vox Phantom (Mark V) – have made a comeback! These Brit Boom-guitars have claimed their place in history as the chosen axes of the Rolling Stones’ original lead guitarist Brian Jones (Mark III) and Tony Hicks (Mark V) of the Hollies.

But the best news is that these new versions come at quite affordable prices!

The Vox Mark III (current price in Finland approx. 355 €) sports a symmetrical body, which calls to mind old lutes or the Greek bouzouki.

This reissue comes with a short 22-inch scale (610 mm), making it an ideal beginner’s instrument.

The Teardrop is build from a basswood body and a bolt on maple neck. The fretboard is crafted from rosewood.

The new, smaller version of the legendary Vox-headstock cuts down on neck weight and thus improves the guitar’s balance. 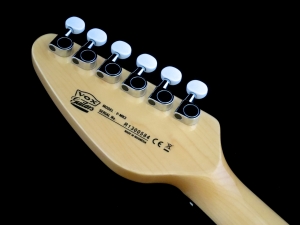 The Mark III is equipped with a set of modern sealed tuning machines that sport off-white buttons.

Both Voxes comes with a modern two-post vibrato bridge.

Three springs are factory-installed, but you can find a fourth spring in the gig bag, should you desire a firmer feel.

Vintage-snobs probably will scoff at the narrow tremolo block used in this vibrato. There are claims that this type of block diminishes sustain, but on the other hand Floyd Rose systems also use narrow blocks and nobody’s complaining.

There are three singlecoil pickups mounted to the three-ply scratchplate, meaning we’re in for a nice, sprightly vintage tone in all likelihood.

The traditional passive electronics comprise a five-way switch, as well as a master volume and a tone control.

The basic ingredients for the angular Vox Mark V (current price in Finland approx. 355 €) are virtually the same as in the Mark III.

There’s a rib cage contour in the Phantom’s basswood body, too. 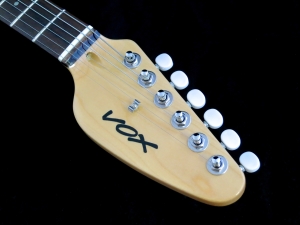 Both Mark-models feature gloss-finished maple necks with truss rod access at the headstock.

The vibrato bridge is surrounded the large pickguard of the Mark V. 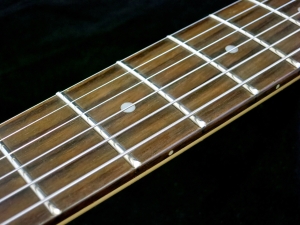 Both Voxes display very decent fretwork, which isn’t always a given in this affordable price bracket. The frets have been polished to a gleam and all ends have been rounded off carefully.

Vox Mark V Phantom is equipped with the same pickups…

…and the same controls as the Mark III Teardrop.

Both Vox Marks are sold with a nice gig bag!

The Vox Mark III is a very compact electric guitar, with our test sample also being nicely light in weight. Due to its very rounded body the Terdrop probably isn’t the most comfortable ”sofa guitar”, but on a strap everything feels hunky dory.

The whole vibe is quite reminiscent of, say a Fender Mustang, no doubt because of the Mark III’s short-scale, gloss-finished neck with its round D-profile. With the factory set of 010-gauge strings bending is very effortless. Our test sample’s very low – but buzz free – action (E: 1,6 mm/e: 1,3 mm) pays testament to Vox’ workmanship. Used in moderation the vibrato works decently, but don’t expect Floyd Rose-style return to pitch.

The clean tones of the Vox Teardrop works great in a Sixties-style poppy, jangly context or for funky workouts:

Add some overdrive for some nice, sinewy vintage Rock-sounds: 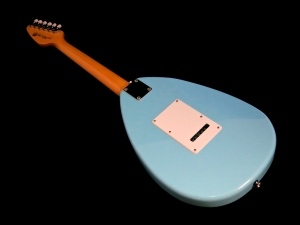 The Vox Mark V doesn’t seem to want to fit in you lap – it takes a while to get comfortable, when playing sitting down. Our lightweight test samples’ strapped-on balance proved to be excellent, though.

In most respects the Phantom feels very similar to the Mark III, with its comfortable, vintage-style neck. Straight out of the gig bag our test sample’s intonation was a bit fruity on a couple of strings, but this was corrected in no time with the correct screwdriver. The action was set quite low (E: 1,6 mm/e: 1,1 mm) on the Mark V, too. And again, as with the Teardrop, the Phantom still rang nice and true without any rattling. Well done, Vox! Should you prefer a slightly firmer feel, I’d suggest moving up to a 011-gauge string set.

Both Voxes sound almost indentical – acoustically, as well as amped up.

This is the Mark V Phantom’s clean delivery, played through a small Marshall combo:

I really like the gritty and slightly rude Rock-sounds you can get from the Mark V:

Due to their unconvetionally-shaped bodies, Vox’ Mark range always runs the slight risk of being regarded as mere ”poser guitars”, better suited to music videos that to actually making music.

This is far from the truth, though, because these new versions of the Mark III and Mark V really deliver nicely vintage-tinged sounds for the Pop, Beat, Blues, and Classic Rock genres. In view of their pocket-friendly prices, quality workmanship, quirky looks and great sounds, I can only applaud Vox for bringing back the classic Teardrop and Phantom models. Try one!

A big thank you goes to DLX Music Helsinki for the loan of the review guitars!

– not the most natural ”sofa guitars”