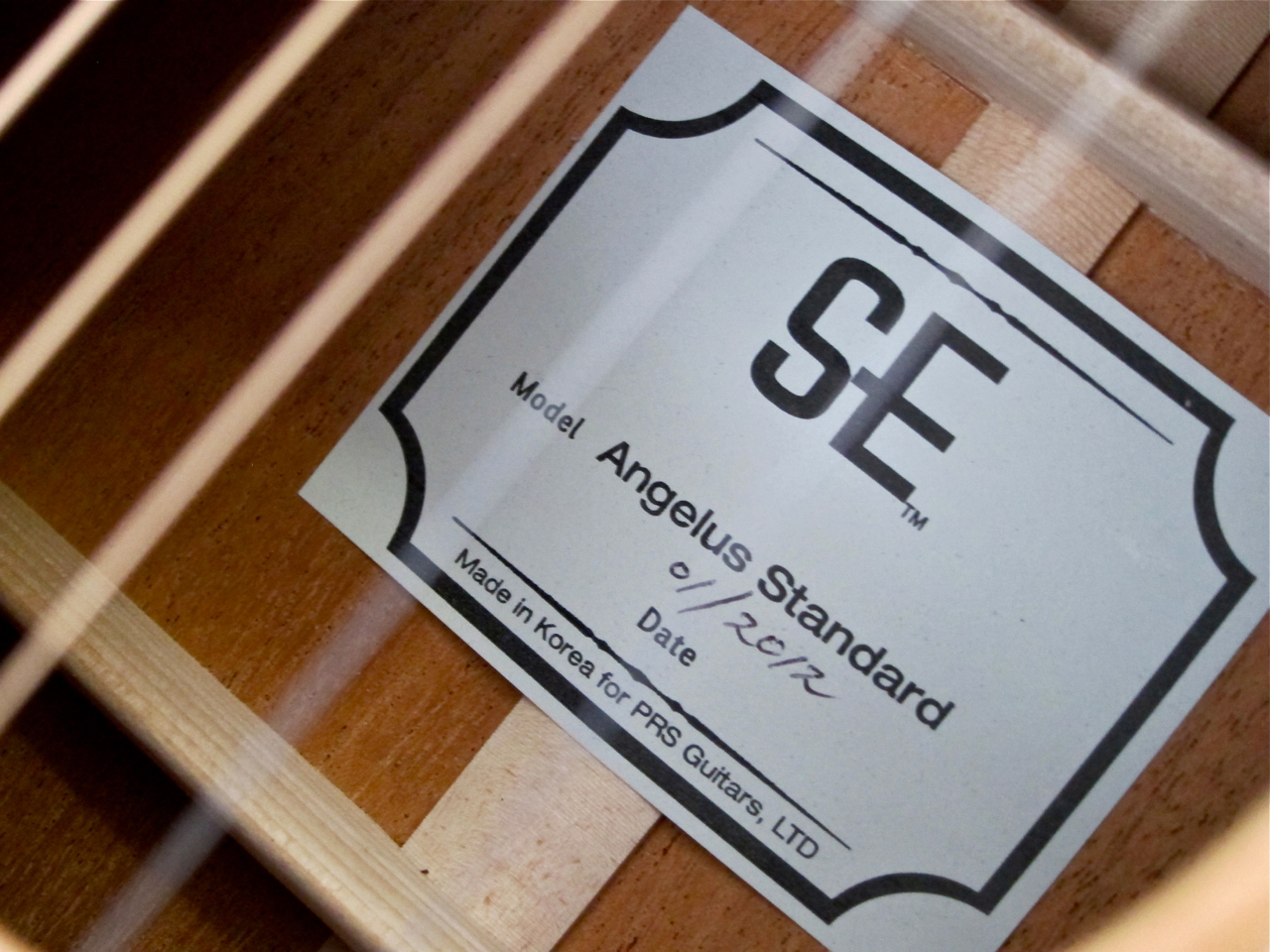 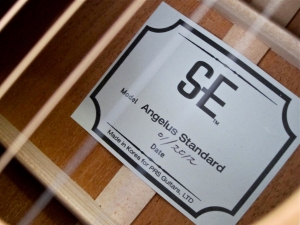 A special feature on all PRS SE steel-strings is their proprietary top bracing pattern which seamlessly combines the best bits of traditional x- and fan-bracing patterns. The end result should be a very dynamic and open-sounding acoustic tone.

The PRS SE Angelus Standard (current street price in Finland approx. 730 €) is a beautiful and stylish piece of work.

A Grand Auditorium’s body has about the same cubic content as a Dreadnought. Its rounder shape with a more slender waist makes it more comfortable to play, and also produces a different basic voicing. Grand Auditoriums tend to sound more open with added clarity in the lower midrange  (between 600 – 800 Hz) compared to a Dreadnought, making them easier to record.

The SE Angelus Standard is crafted from solid sitka spruce for the top and solid mahogany for the body’s back. The rims are pressed from mahogany plywood, adding a little sturdiness.

Mahogany is also the material of choice for the Angelus’ neck.

It’s surprising to see how well PRS’ traditional headstock looks on an acoustic guitar. In the SE Angelus’ case the headstock features a rosewood veneer, as well as white binding.

The top nut has been carved from genuine bovine bone.

The tuners are the same quality units PRS also uses for their SE electrics.

The SE Angelus’ neck is a three-piece affair, with a long piece making up the bulk of the neck, and two small added pieces for the headstock and the neck heel, respectively.

The mahogany used for body construction is gorgeous – the honey-hued wood looks good enough to eat underneath the thinly applied transparent lacquer.

By the way: A second strap button comes as standard on the SE Angelus. 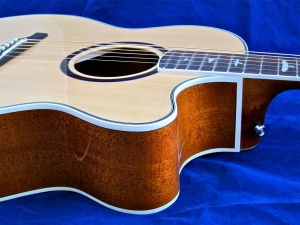 Here’s a view of the Angelus’ rounded cutaway – a typical feature on many Grand Auditorium sized instruments.

A rosewood rosette adds a tad of understated charm to proceedings.

The SE Angelus displays extremely clean workmanship throughout – even on the inside! 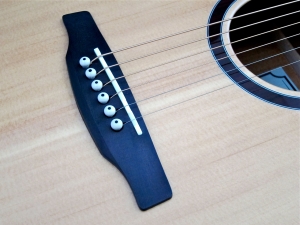 The compensated saddle in the guitar’s rosewood bridge is made from tone-enhancing genuine bone.

But the PRS SE Angelus Standard isn’t just nice to look at, this guitar is also a sheer joy to play!

The instrument is lightweight, and just touching it already gives you a sense of this guitar’s eagerness to resonate.

PRS have made a wise decision in my opinion, when it came to choosing a neck profile for the Angelus: This neck is an unabashedly steel-string acoustic type of neck. No foul compromises to win over electric players – the Angelus’ neck profile is a chunky affair somewhere between a D- and a U-shaped cross-section.

If you’re new to steel-string acoustics – or just used to the feel of many electroacoustic guitars – the first impression might be a slight bit disconcerting, but fear not! In the long run a big neck will help your left-hand technique, and it’s the right choice for big tone as well. 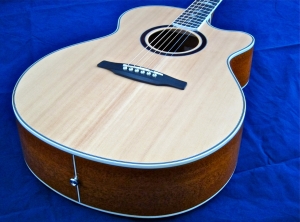 And what a tone it is! I can only heap praise upon the Angelus’ tone, sustain and dynamics – what a beautiful open sound!

String-to-string balance is outstanding, regardless of playing style or chosen register. It’s not often that you find a brand-new guitar with such a mature voice from the get-go – especially in this price bracket!

I also recorded the SE Angelus with different recording set-ups, and can only report that it is almost impossible to get a bad (or muddy) sound out of this instrument.

This is what the Angelus sounds like when recorded with a Zoom Q2HD:

…and here are two clips, which I recorded using an AKG C3000 condenser mic close to the guitar, pointing at the 14. fret, paired with a Samson C02 at shoulder height facing towards the bridge (–> Focusrite Saffire 6 USB –> Apple Garageband):

Thanks to DLX Music Helsinki  for the loan of the review instrument!

+ solid top and back