Apart from Mannedesign’s wide array of electric guitars and basses the brand’s model range also includes several steel-string acoustics, two of which are featured in this review:

The Mannedesign PFM (660 €) is an all-solid, small-bodied instrument for the Blues-, Folk- and Roots-guitarist, who is looking for a vintage-toned guitar.

The deep and rich matte finish on the PFM’s cedar top embues the instrument with a good dose of street credibility.

The mahogany neck is one-piece, save for the upper half of the headstock, and a another piece used to get the neck heel up to its full length. The neck joint is a the 12th fret, just like it was on many guitars in the 1930s.

The back and rims of the soundbox have been crafted from beautiful solid mahogany. 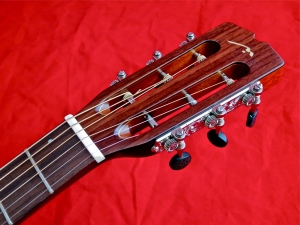 The headstock sports a rosewood veneer, which has been beautifully inlaid with a maple Mannedesign-logo.

TRhe top nut has been carved from genuine bone. 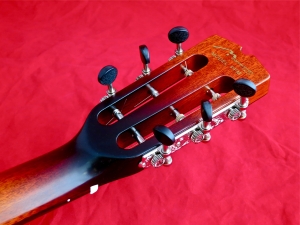 Gotoh supplies this model’s quality open tuning machines, which are a well-designed update on vintage tuners. 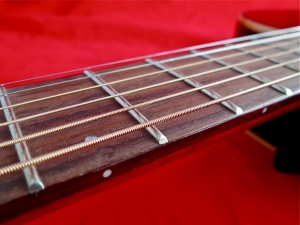 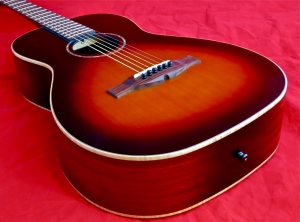 The PFM’s body has been adorned with stylish flame maple binding, while the guitar’s beautiful rosette sports abalone inlays. 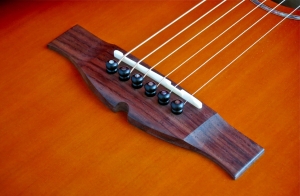 The characteristic dip of the Mannedesign’s headstock is mirrored in the rosewood bridge’s design.

The compensated bridge saddle has been made – just like the top nut – from bovine bone, which is still one of the best materials for this purpose. 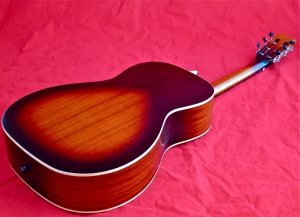 Roberto Della Vecchia is an Italian Fingerstyle-wizard – I can only recommend hopping over to his website to check the man out!

The RDV’s mahogany neck is one-piece, save for a separate bit used to make up the neck heel.

The solid Indian rosewood used for the back and the rims is stunningly beautiful.

The body of the guitar comes with a gloss finish, while the neck has been finished with a matte lacquer. 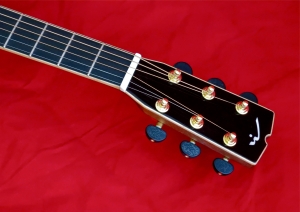 The headstock facing is black ebony, inlaid with a mother-of-pearl Mannedesign-logo. 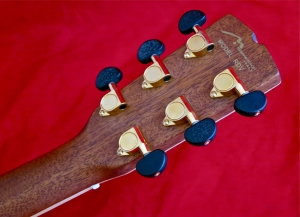 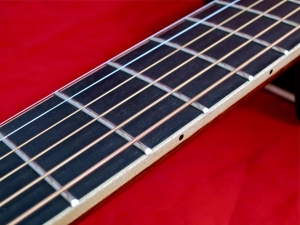 Maple binding frames the ebony fingerboard. The RDV is equipped with 20 medium-sized frets. 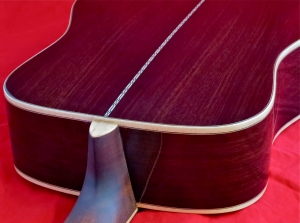 The back’s centre line has been inlaid with a very beautiful black-and-white motif. 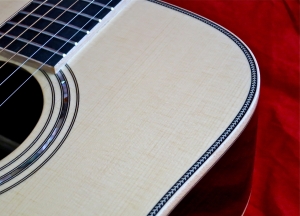 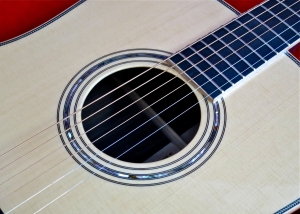 The rosette’s central ring is made up of genuine mother-of-pearl. 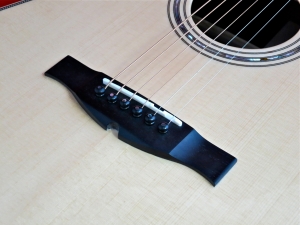 The RDV’s bridge is the same design we’ve already seen on the PFM, but this time crafted from deep black ebony. 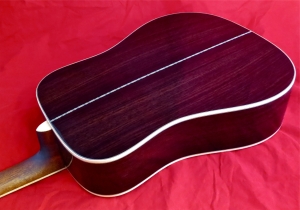 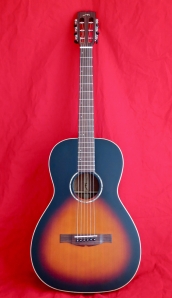 As most do Parlour-sized guitars, the Mannedesign PFM has a medium-length scale of 63 cm, which makes bending the 012-gauge strings relatively easy to bend. Instead of a ”vintage-correct” – and often loathed – V-profile neck, Mannedesign have opted for a more sensible and nice-feeling middle-of-the-road D-profile. The guitar’s nut width measures 4,4 cm, while the string spacing (E to e) at the bridge stands at 5,4 cm – good for both plectrum player, as well as fingerstylists. The test sample was set up with a very friendly action (E: 1,9 mm/e: 1,5 mm).

The Mannedesign PFM is a typical Parlour-guitar in the best possible sense. The guitar’s sound is quite dry and has a barking attack, with a strong and slightly nasal overall mid-range focus. Fingerstyle-guitarists will love the relatively light bass register, which keeps things transparent. When using a plack, you will be positively surprised by how well the PFM is able to cut through and project – great for Ragtime and early Blues. The Mannedesign PFM also records really well, because it doesn’t clutter the low-mid and bass registers. 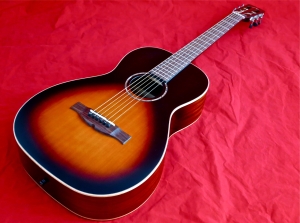 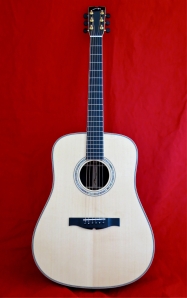 The Mannedesign RDV has the long scale (63 cm) typical of a Dreadnought. Roberto Della Vecchia requested a slightly wider-than-usual string spread at the bridge (5,9 cm) to accommodate the needs of fingerstyle players. The neck profile is a very nice, oval C. The Della Vecchia model’s set-up was superb, with a nice and comfortable action (E: 2,0 mm/e: 1,5).

Rosewood-bodied Dreads often turn out to be great ”shouters”, which also holds true for the RDV’s healthy volume levels. There’s plenty of lush bass on tap, with a warm mid-range and shimmering top-end to boot. The Mannedesign RDV is a prime exponent of the famous Dreanought-sound, offering you volume, character and dynamics in spades. 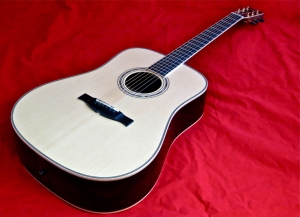 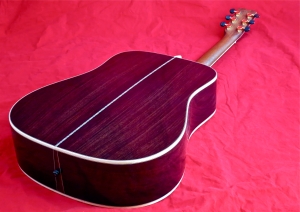 Mannedesign-instruments still have a rather low profile here in Finland. Still, based on this review I can only recommed a closer look at the brand’s acoustic offerings.