Danish effects specialists T-Rex have caused an enormous stir with their newest guitar pedal. Their new stompbox – called  the Replicator – is a genuine, all analogue tape delay, hand-assembled in Denmark. These days tape echoes in themselves are rather rare beasts, but T-Rex ups the ante by giving us the first tape delay with a built-in tap tempo function!

What is a tape delay?

The tape delay was the first studio effect invented (back when Rock ’n’ Roll was in its infancy), and it was produced by ”misusing” an open-reel tape recorder (hence the name).

The magnetic tape recorder – originally called the Magnetophon – was a German invention from the 1930s, which used a plastic tape coated with magnetisable material as its recording medium.

An empty – or wiped – magnetic tape has all the metal particles in its magnetisable surface pointing in the same direction. The result is silence (in theory) – or rather: some tape hiss.

During recording the recording head transforms the incoming audio signal into magnetic bursts of different strength, wavelength and polarity, and magnetises the tape’s metal particles, rearranging them into different magnetic clusters. During playback these ”magnetic ripples” are picked up by the playback head and translated back into an audio signal.

Most C-Cassette players have/had only two heads – one erase head, plus a combined recording and playback head – but reel-to-reel tape recorders in the studio usually came with at least three heads (erase, record, playback). Thanks to the separate recording and playback heads the studio engineer was able to listen to the recording in progress as it sounded on the tape, while it was being recorded (to listen for tape distortion or tape defects/drop-outs).

In the end, a recording engineer somewhere hit upon the bright idea to use the studio’s backup tape machine as an ”effect processor”. The engineer used the main recorder in the usual way, to record the song’s final (live-) mix off the mixing console’s master buss. The spare tape recorder was fed only the instruments and vocal parts (from the mixer) which needed to receive tape delay. If you mixed the output of the second recorder’s playback head into the recording desk you got a single delay effect. By feeding a small portion of the delay signal back into the delay tape machine’s input you could get multiple delays.

Tape delays meant for live use usually come with more than one playback head, which makes it easier to fine-tune the length of the echo effect, and which makes rhythmic delay patterns possible. Almost all mobile tape echoes use tape loops as their recording medium.

The black head is the erase head, next in line is the record head, followed by two playback heads. 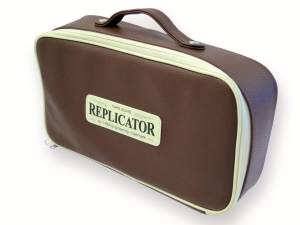 The T-Rex Replicator (current price in Finland: 849 €) comes in its own, vintage-themed ”vinyl leather” carrying bag, which contains the Replicator itself, as well as its power supply, a second tape loop cartridge, the owner’s manual, and a set of cotton swabs (for cleaning the heads with a drop of isopropyl alcohol).

The Replicator is quite a rugged pice of gear, made to withstand onstage use.

The 24 VDC power supply, though, seemed a little weedy in comparison. 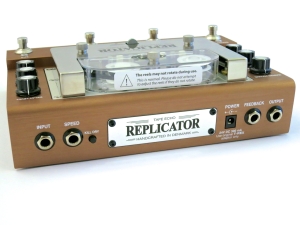 The back panel offers the following connectors:

There are the input and output jacks, as well as two connectors for expression pedals, should you want to control the delay time (tape speed) and/or the feedback on the fly.

The little Kill Dry-switch mutes the dry (uneffected) signal in the Replicator’s output. This is a very handy feature, should you want to run the Replicator connected to a parallel effect loop, or to a mixing desk using a send/return-bus. 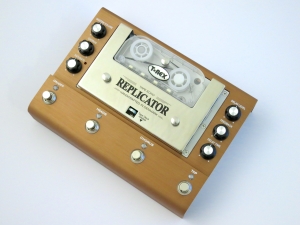 The T-Rex Replicator offers you six controls and four footswitches to control its functions:

The On/Off-switch does what it says on the tin. When the delay effect is off the Replicator’s tape loop stops running.

The Heads-switch gives you access to the effect’s three delay modes by switching the playback heads on or off. A green light means you’re using the long mode (delay times of approx. 250 – 1.200 ms), red stands for short mode (125 – 600 ms), while orange means you’re running both playback heads simultaneously for a rhythmic delay pattern.

Stepping onto the Chorus-switch will introduce deliberate wow and flutter (tape speed fluctuations) to produce a chorus-style effect that can be fine-tuned with the corresponding control.

Tap Tempo does what it says on the tin. Although this is quite a normal feature on digital delay units, the Tap Tempo-switch on the Replicator is huge news for tape delay fans. T-Rex have developed a system to control the unit’s motor digitally, making it possible, for the first time, to synchronise a tape delay precisely on the fly.

The Saturate-control holds a pivotal role for the sound of the Replicator’s delays. Depending on its settings the effect can either be clean and dynamic or greasy and overdriven.

Adjusting the Delay Time- and Feedback-controls on the fly can produce some wild and wonderful effects (in Feedback’s case up to and including self-oscillation).

Despite being a child of the Sixties, who has used a tape echo as the main effect in his first band’s PA-system, I have to admit that I’ve grown accustomed to the clarity and precision of digital effects. My first reaction when I tried out the Replicator for this review was ”Is it supposed to sound like this, or is there something wrong?”

Alas, it didn’t take long for the memories of a distant past to return, and I started to really enjoy the genuine old-school tones emanating from the Replicator. You should remember, though, that the Replicator is meant as a handy, portable tool for the guitarist or keyboard player. You shouldn’t expect Queen-style ultra-long, studio quality delay sounds from a compact unit such as this.

Tape speed is of course the most important variable, when it comes to the audio quality of the delay effects – short delay times (= faster running tape loop) will naturally result in cleaner and more stable sounds than long delay times (= a slow running tape).

The first audio clip has been recorded with the shortest possible delay time, while the second clip lets you hear the Replicator running at maximum delay (both clips feature all three head modes):

In my view, the T-Rex Replicator is a portable tape delay of professional quality. You should keep in mind, though, that a genuine analogue tape echo is always (!) a low-fi device in comparison to a digital delay pedal. But it is exactly this authenticity, the slight greasiness, and the sense of unpredictability a genuine tape echo conveys, that makes the Replicator such an enjoyable piece of equipment. The T-Rex’ delay never sounds tacked on, instead it becomes a natural part of your guitar signal’s harmonic content.

I’d say it is hard to overemphasise the advantages this unit’s tap tempo-function brings. The Replicator makes synching your delay child’s play.

I used the T-Rex Replicator to record two demo tracks, which show off the effect’s sounds in different musical contexts:

There’s no beating about the bush about this – the single restrictive factor to seeing the Replicator creep into the pedalboard of each and every guitarist is the unit’s steep price. Most players will baulk at a price tag of over 800 euros for a ”lo-fi effect”, and rather opt for one of the numerous tape delay modellers, like the Strymon El Capistan.

The Replicator, which is lovingly assembled by hand in Denmark, will find most of its clientele among vintage collectors and well-heeled boutique guitar and amp connoisseurs. If you run your original 1950s guitar through an equally vintage amplifier, running an authentic, mechanical tape delay unit will be like the icing on the cake. Especially, if the tape delay is as reliable and easy to use as the T-Rex Replicator.

Is the T-Rex Replicator the best genuine tape delay ever? To my knowledge, there are currently three different new tape echo models on the market – each of them sound great. I would pick the Replicator, though, because it is small enough to fit on a medium-to-large pedalboard, and because of its nifty tap tempo feature.

+ easy to exchange the tape cartridge